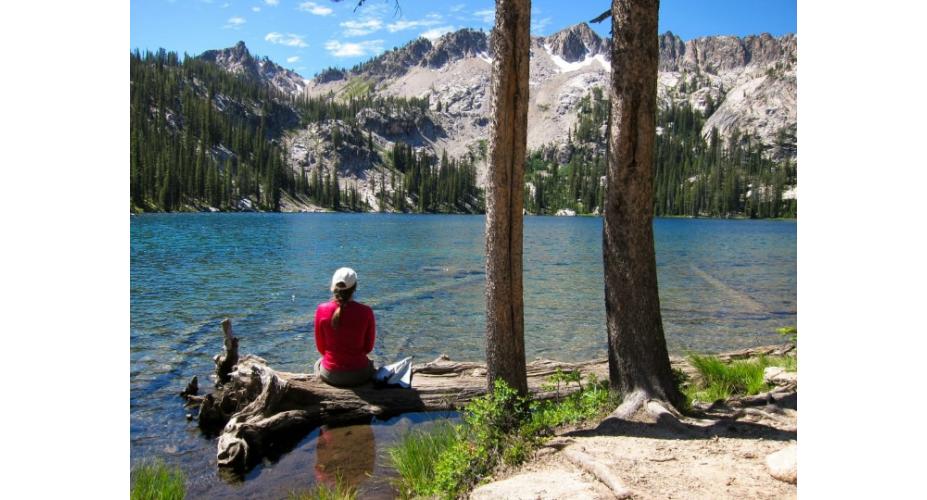 By now you know hiking does wonders for your mind and body. Regardless of your motivation for getting outside—whether it’s to clear your head, catch up with friends, or train for a big trip—it’s easier when you know your hike will end with tantalizing views. Need a little encouragement to get yourself out the door? Take a hike to one of these gorgeous lakes.

With the jagged Shark Tooth formation as its backdrop, it’s not hard to see why the hike toSky Pond is largely considered one of the most picturesque in Rocky Mountain National Park. The nine-mile, round-trip hike is tough—you’ll gain nearly 400 feet in elevation for each mile hiked—but the destination is worth the effort, especially during wildflower season.

The grueling 3.7-mile one-way hike to Lake of the Angels has a reputation as one of the toughest day hikes in Washington. It’s a lungbuster—you’ll gain nearly 3,400 feet on the way to the lake—and the trail can occasionally be tricky to follow, thanks to the carpet of wildflowers beneath rugged Mount Skokomish. All that sweating pays off at Lake of the Angels, where you’ll be surrounded by the craggy peaks and majestic waterfalls of Olympic National Park.

At nearly half a million acres—three-quarters the size of Rhode Island—the Weminuche is the largest wilderness area in Colorado. The moderate hike to three of the seven Highland Mary Lakes is easily accessible from Silverton or Ouray, and for less than a mile and a half of extra effort on top of the 6.6-mile round-trip, hikers eager to see more of theWeminuche’s high alpine tundra can bag a loop including the lakes and a section of theContinental Divide Trail.

The hike to Icefloe Lake isn’t exceedingly difficult or technical, but it’s long: 20 miles out and back. That makes sense, as it’s the highest lake in Grand Teton National Park. Accessible from both Avalanche Canyon and the South Fork of Cascade Canyon, this alpine tarn sits directly below the saddle between the Middle and South Tetons. Icefloe owes its name to its high elevation, rendering it ice free for just a few weeks in late summer.

Visitors to the largest alpine lake in North America have their pick of dozens of trails near the 191-square-foot Lake Tahoe, but the big prize is the 165-mile Tahoe Rim Trail. Fifty miles of trail on Tahoe’s western shore coincide with the Pacific Crest Trail, so the Tahoe Rim has a long-distance hiking feel. Hike a section or plan a longer backpacking trip for peakbagging and panoramic views.

The Beartooth Highway runs 68 miles from Red Lodge to the northeastern entrance toYellowstone National Park in Cooke City, Montana, including over 10,947-foot Beartooth Pass. Beartooth Lake itself is right off the highway (there’s a campground just steps away), but don’t miss the hike from Beartooth to Island Lake, which passes seven other lakes in 8.5 miles.

Sawtooth Lake is a perfect place to rest after a days hike.

The iconic view of 10,190-foot Mount Regan reflected in Sawtooth Lake has long drawn artists and photographers to Stanley. The lake itself is stunning, but you’ll be impressed by the jagged peaks of the Sawtooth Range on the 4.3-mile hike out, too.

It's easy to see why Diablo Lake is a popular destination for paddlers, too.

Dazzling turquoise Diablo Lake is actually a reservoir. Its color is thanks to glacial silt suspended in the water. The hike from the North Cascades Institute parking lot to the lake has some moderate elevation gain and exposure over its 3.8-mile length, but is still family friendly. Bring your fishing rod: the lake contains four species of trout.

Carved by glaciers millions of years ago, the sandstone cliffs of Pictured Rocks overlook Lake Superior, the largest of North America’s Great Lakes. Much of our first designated National Lakeshore is managed by the National Park Service, so pets aren’t allowed on trails. For killer views of the lake and bluffs, hike a section of the Lakeshore-North Country Trail along the cliffs.

There’s no shortage of hiking in the Finger Lakes region. The 560-mile Finger Lakes Trail passes all 11 lakes, including Cayuga and Seneca—two of the deepest lakes in North America—on its course from the Catskills to Alleghany State Park. One 12-mile offshoot of the FLT, the Onondaga Trail, boasts top-notch fall foliage and views of plunging waterfalls.