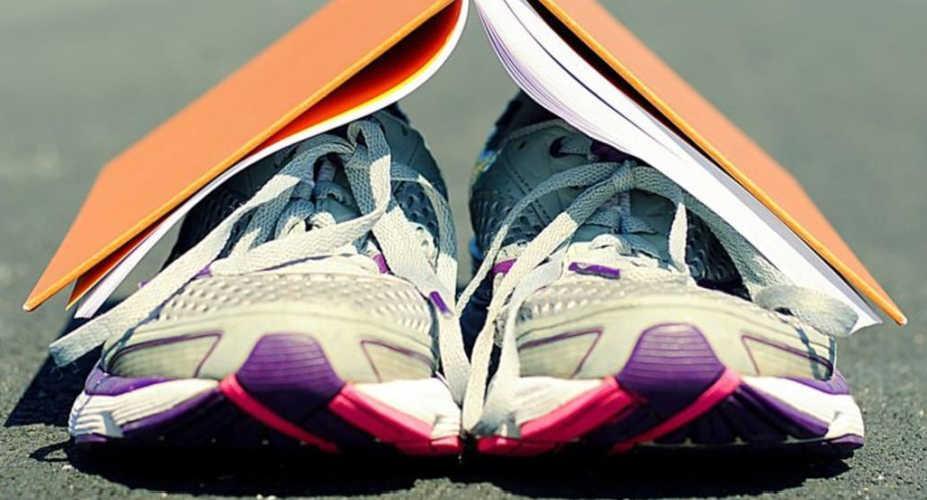 Be inspired and pick up some valuable insight with these top running reads.

Even the most obsessed runners can only spend at most a few hours running every day, which leaves a lot of time to fill. Sure, you might “work”, and occasionally need to “sleep” and “eat”, but there will be plenty of free time left where you need something to do that isn’t running. So why not pick up one of these excellent books and use that time to read about running?

Running With The Kenyans: Discovering The Secrets Of The Fastest People On Earth

In Way Of The Runner, Adharanand Finn explored a largely unknown running culture in Japan, but the world is well aware of the prowess of Kenyan runners, having watched them triumph in Olympic events and major marathons for many years. To write Running With The Kenyans, Finn moved to Kenya and trained with the country’s elites to try and discover the secrets of their speed – but the book is also an inspiring account of his travels and training for his first marathon.

“I loved Adharanand Finn’s Running With The Kenyans,” says professional ultramarathon runner and Hoka One One athlete Tom Evans. "I spent a year in Kenya and read the book while I was out there. I then went to Iten [the mountain town used by many Kenyan runners as a base] and ran with the guys up there and did the Lewa marathon, which is the big race he [Finn] did out there. I actually raced against Adharanand and we’ve been frenemies ever since – he didn’t like me beating him.”

Running With The Buffaloes: A Season Inside With Mark Wetmore, Adam Goucher, And The University Of Colorado Men's Cross-Country Team

You’d probably assume, quite fairly, that the exploits of the 1998 University of Colorado cross-country team won’t hold much interest for you – but you’d be very wrong. Misfortune strikes the team at every turn, but they continue to rally and excel in heroic fashion. Go ahead and dip your toe into the world of top-level US collegiate sports. You won’t be disappointed.

“I read [Running With The Buffaloes] five or six times,” says professional ultramarathon runner and Hoka One One athlete Hayden Hawks. “It reminds me of my days at an American college running cross-country and it helped to fuel my dreams. I always wanted to be an All-American and maybe win a national title, and although I never won a national title I was an All-American [selected by a national body of coaches and experts as one of the best college athletes in the US]. It always takes me back and reminds me where my love for running came from.”

The Lore Of Running

If you want to take a deep dive into every aspect of running performance this is the book for you. Author Tim Noakes looks in forensic detail at training, racing, injuries, physiology, the secrets of world-class athletes and pretty much everything else related to the sport.

“This is a slightly technical running book, which goes into lots of detail about how to improve performance,” says Evans. “It’s really interesting, quite deep – I’d say you’ve got to have a coffee before you start it and you might end up reading every page twice!”

Feet In The Clouds: A Tale Of Fell-Running And Obsession

If you’ve only ever run in cities, we heartily recommend expanding your horizons by reading Feet In The Clouds, which dives deep into the world of fell running – an obsessive passion in areas of Britain like the Lake District. The author, Richard Askwith, falls so in love with the sport that he tackles the infamous Bob Graham Round – an attempt to summit 42 of the Lake District’s highest peaks in 24 hours.

Two Hours: The Quest To Run The Impossible Marathon

Even if you only have a passing interest in running you will probably have heard of Eliud Kipchoge’s (ultimately unsuccessful) attempt to run a sub-two-hour marathon as part of Nike’s Breaking2 project in 2017. Journalist and amateur runner Ed Caesar had unique access to the athletes and experts behind the attempt, and his resulting book gives unparalleled insight into elite marathon running, as well as the history of the sport.

Running has a way of getting its hooks into a person, no matter how sceptical of the sport you might be before you start. This book not only follows broadcaster Vassos Alexander’s journey from reluctant runner to ultramarathoner and Ironman triathlete, but thoroughly explores how running can become an obsession for anyone. Keep a pair of trainers handy, because you will want to run after reading.

The Way Of The Runner: A Journey Into The Fabled World Of Japanese Running

Six Japanese runners finished the 2018 Tokyo Marathon in under 2hr 9min. That might not mean much to you but to put it into context, in the history of British running only five men have run under that marker, and only eight Americans have done it. That strength in depth is a result of Japan being one of the most running-obsessed nations on Earth, especially long-distance running. In this fascinating book, journalist Adharanand Finn explores the unique running culture in Japan.

The most bizarre things tend to pop into your head when you’re running and it’s fair to say most of us would struggle to explain them with any clarity later. Fortunately, Haruki Murakami is one the world’s greatest living writers as well as an avid runner, and this book perfectly captures the stream-of-consciousness thinking many experience when running. If you’re a fan of Murakami and running, this will really hit the spot.

How To Lose A Marathon: A Starter's Guide To Finishing In 26.2 Chapters

If exultant tales of elite – or at least very good – runners rejoicing in the joys of the sport don’t tally up with your own experience of running, try this book. Author Joel Cohen is happy to wallow in the misery that can arise from attempting to run a marathon, and does so in amusing fashion here. If you’ve signed up for a marathon only to find that the fabled “runner’s high” never arrives during or after your own runs, How To Lose… will be an invaluable guide to getting through the race.

Born To Run: The Hidden Tribe, The Ultra-Runners, And The Greatest Race The World Has Never Seen

It’s the book that sent thousands out on to the streets shoeless (or wearing very minimal shoes) to try barefoot running. We’d recommend you don’t do that – at least, not without a long and careful plan to prepare your body for it – but it’s still worth reading Christopher McDougall’s inspiring Born To Run, which focuses on the Tarahamura tribe of northern Mexico, renowned for their long-distance running ability.

One of the greatest Olympians of all time, Emil Zátopek redefined what it took to be the best with his savage interval sessions. He trained in all conditions, sometimes while wearing army boots, and left his rivals in his wake as a result – Zátopek is the only person to win the 5,000m, 10,000m and marathon at a single Olympic Games. This terrific biography by Richard Askwith covers both Zátopek’s astonishing achievements and his life outside running.