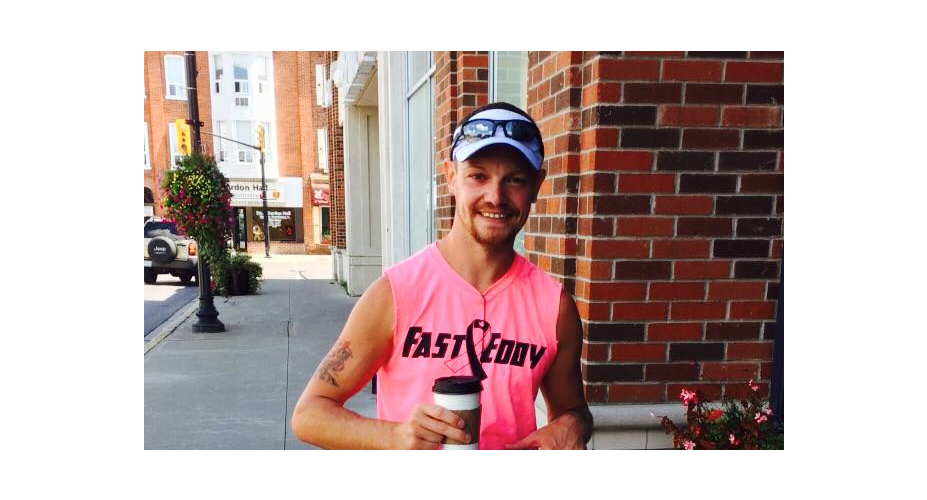 What does it take to run across Canada solo and unsupported, not once, but twice? For this edition of Superfeet Stories we’re going to take you behind the scenes of a there-and-back trek across Canada for a cause.

Edward “Fast Eddy” Dostaler of Kamloops, BC, is an ultra-marathon running machine, high-tailing it 21,585km (13,413 miles) to raise awareness for Alzheimer’s and breast cancer. At Superfeet, along with more than 100,000 people donating and following his campaign. For more info on Eddy and his extraordinary commitment to raising awareness for these two causes, continue reading along.

In special coordination with the Terry Fox Run, Fast Eddy will time his crossing from Prince Edward Island into New Brunswick by running the 12.9km Confederation Bridge on Sunday, Sep. 20. According to Eddy, he will be the first cross-country runner to use the bridge as part of his trek.

What originally got you started in long distance running?

It was this run, the idea, the dream, and the journey. I always envisioned I would across Canada one day. When I was 15 I did a research paper on Terry Fox and Rick Hansen, their act seemed so selfless that I realized I needed to help people as well. Although I didn’t’t have any physical setbacks like they did, I decided I would run for Alzheimer’s to make my run stand apart, because it didn’t personally effect me. When I started to train two years ago, my grandmother was diagnosed with the horrible disease and that really is what started my transition from a sprinter to a longer distance runner. That’s what started the “There and Back Run.” 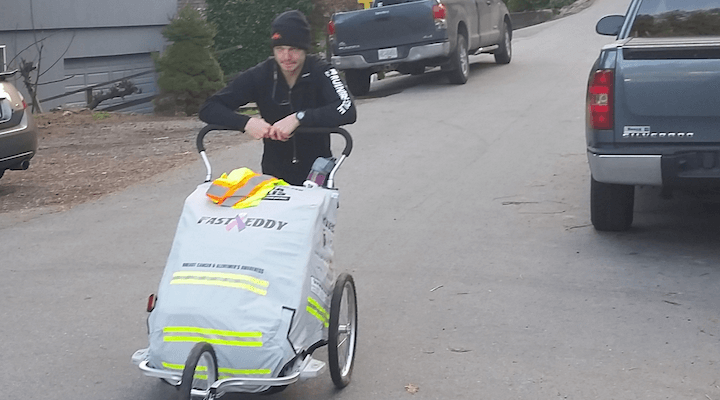 What were the physical and emotional challenges involved in such a big switch, from sprinting to ultra marathon running?

No one said this would be easy, and for me it was tough. I didn’t get to train slowly and build up to this long distance—I just jumped in. I was ignorant and thought I should just be able to do it. However, being a sprinter, I didn’t know how to pace myself. I had no stamina  and I didn’t have the right tools. Physically, I only lost nails, had sore muscles, and swollen ankles, but nothing that has taken me off my feet, or prevented me from running. Mentally, it was tough. Why can’t I run my speed over this distance?

I had to train and seek advice. My sponsor, Runner Sole, became a huge support, and although I trained alone, they were there for any consults that I needed. They got me into the products I use today and who have sponsored me from the beginning: Hoka One One, Bodyglide, Runner Sole, The North Face, CEP, and Superfeet.

Can you tell us a little about the "There and Back” campaign? Where did that idea come from?

Well, I wanted to run across Canada once—and once only—however everyone does that. How can you have your journey stand out when everyone seems to do the same thing, every summer? People walking it, father-son teams biking it…to me it seems like every average Joe does this now. Then I thought, why not go solo and unsupported? Only five people have done that. 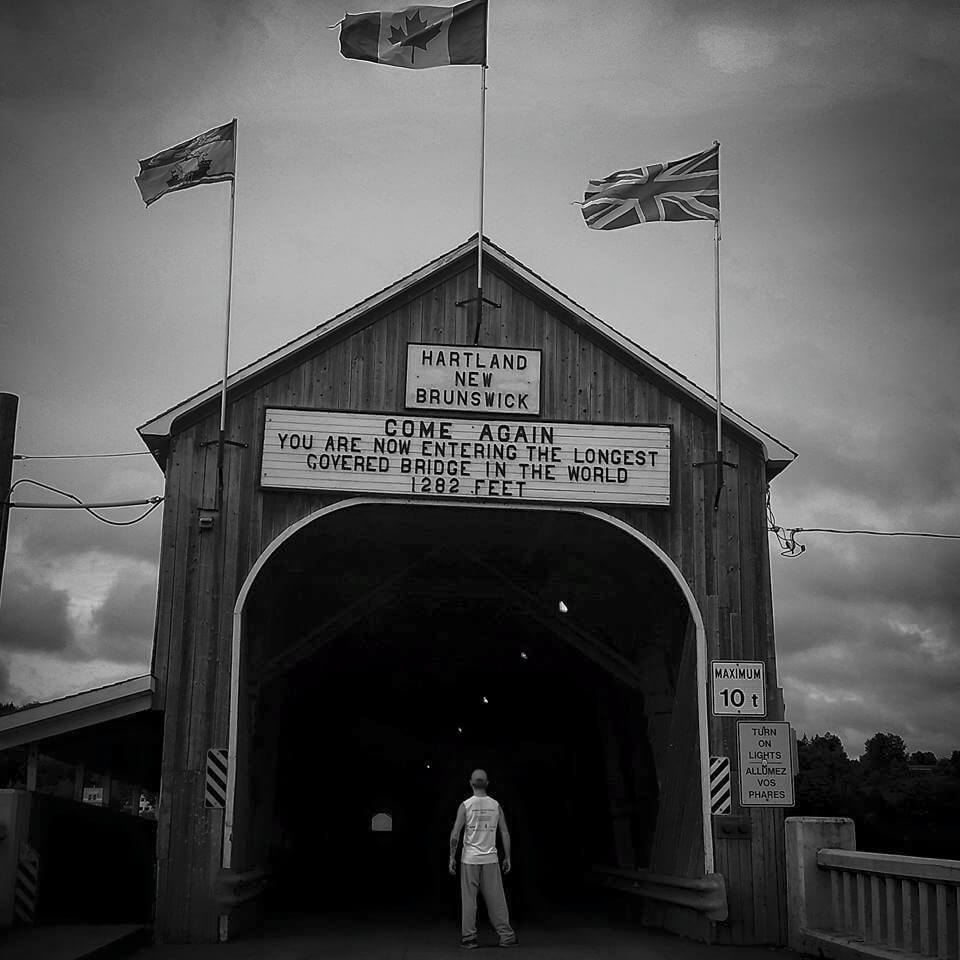 So I went to talk to a professor, Dr. Tom Owen, and was going to tell him I was running across Canada for Alzheimer’s. He himself was an advocate for Breast Cancer, and when I found out of his passing that night, I looked at my map and realized I was dotting markers for a route back… and so it began.

How did you get the name Fast Eddy?

I was a very fast child growing up. I use to play any sport as long as speed could be used as an advantage. Never anything long distance or that needed a large amount of stamina. For example, soccer would have a give-and-go type play, kick the ball past the furthest player and it would be a sprint to see who could get to it first. I was very fast and still am to this day. 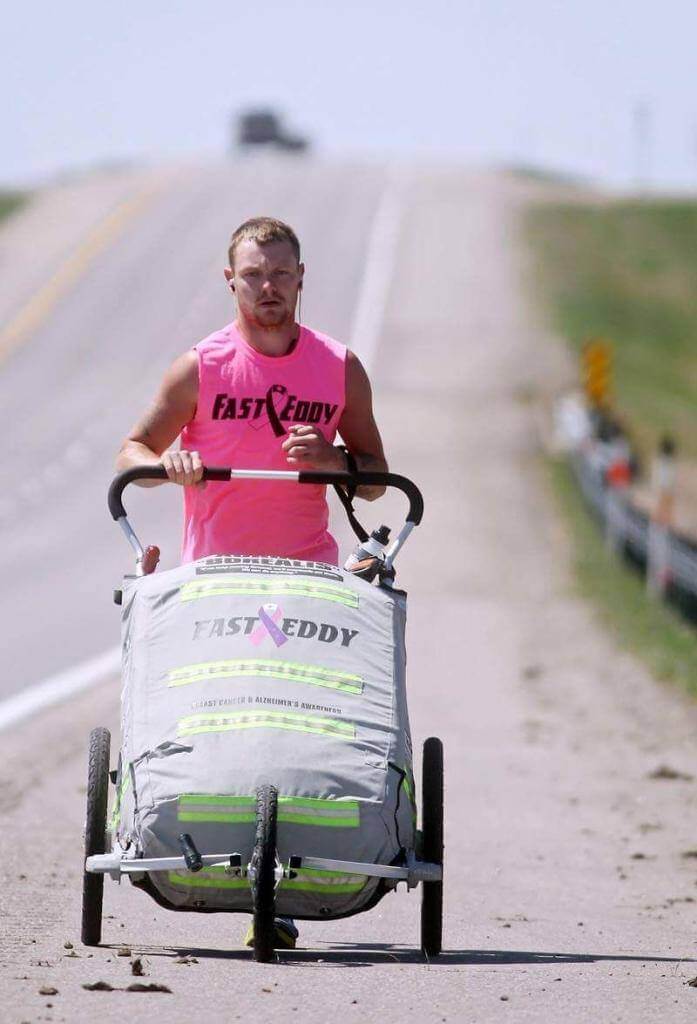 However, this run is not a sprint, but an ultra marathon like no other. 21,585km plus ten 24-hours. The name Fast Eddy can still be applied though, because what I do best and the advantage I have is the ability to stay awake. To keep moving forward while others sleep, and although I move slow, some might consider the tortoise faster than the hare, because like it or not the tortoise won the race.

How have Superfeet insoles changed the way you run?

Personally they took some getting use to. I never wore insoles and didn’t’t think I needed to. The first thing I was told to do was to walk in them…instead I ran a race. My left foot went a little numb and I thought that was very bad, but I placed fifth anyway. I walked in them after, and soon tried to switch to work boots but I found the comfort and support was not there. I could see the effects on my feet: they didn’t hurt as much and I had the support to run these ultra long distances. The longest was September 19th-21st (48-hour run of 254km or 620 laps). They work! I use the Carbons because they have a quicker snap to them. They support my whole foot and allows me to keep moving forward.

I’m not a professional athlete, but I’m being paid to run, speak, or do this. I say these things about these products because they work for me. Because I’m an everyday guy trying to make a difference, and I find these products and these companies have something to offer everyone. You could put a professional runner saying how great the product is, and it may sell a little, but having an average guy who is running across Canada and back say how awesome they are is much more believable. He uses the product because it works. I have had knee surgeries, broken ankles, and everything to stop me from doing this, but I keep moving forward. I can’t fail because I won’t fail. Because I believe it’s just not possible. These products, Superfeet products, they allow me to succeed.

What has been one of the most memorable experiences so far during “There and Back”?

The people! Plain and simple, that’s and the easiest answer I can give. It’s been difficult to gather support when so many do this, however you never forget those who have helped you and gone out of their way to ensure your success. Your success is their success because together we are doing amazing things. 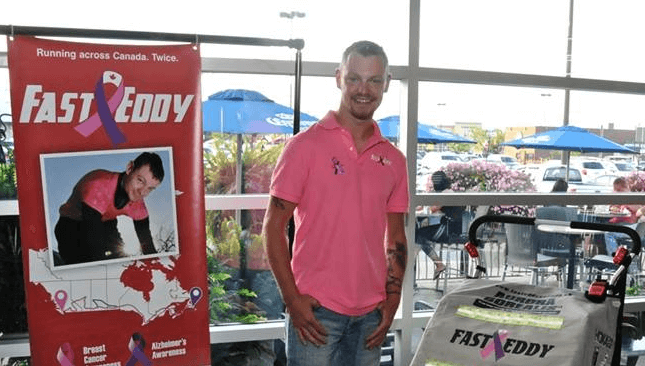