How to Get Your Kids to Have Fun Outside 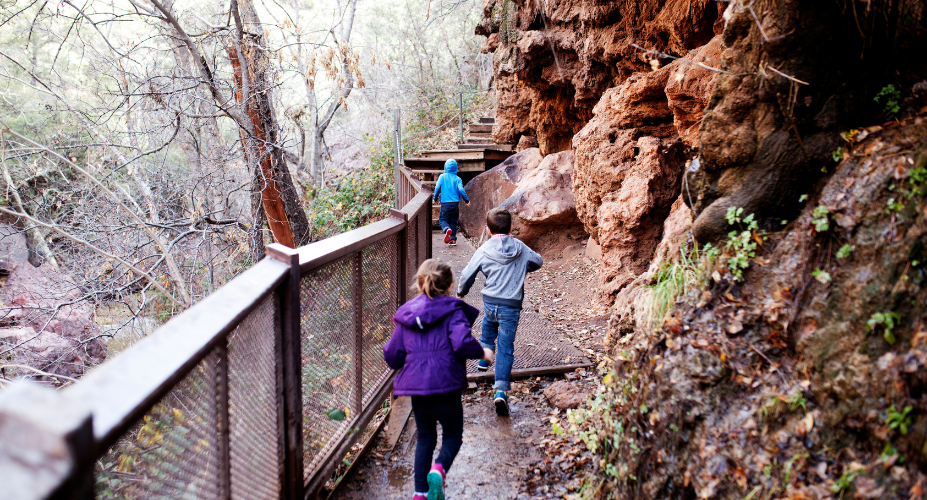 How to Get Your Kids to Have Fun Outside

The secret? Awesome survival shelters, a mess of bullheads, and the best S'more ever

Summer is the perfect time to spend time in the outdoors with your kids. But how do parents get their kids to stop playing video games and get outside? The answer is simple: Teach them how to make a lean-to survival shelter; take them fishing for bullheads; and show them how to make a bacon s’more—yes, bacon!

Total s’more domination requires only a couple of easy-to-score extra ingredients. First, whip up a batch of brown-sugar-glazed bacon. Line a baking sheet with parchment paper, spread out a dozen strips of bacon, and drizzle with 2 tablespoons of brown sugar. Bake at 350 for about 25 minutes. Remove, cool, and hide the secret ingredient in a zippered plastic bag.

At camp, commence the age-old ritual, with flaming marshmallows and chocolate bars melted on a fire-ring rock till they’re gooey. Now break out the glazed bacon. A half-strip tucked between the marshmallow and chocolate, and the kids are stunned. But the show’s not over. Next up is a jar of caramel sauce. Drizzle the honey-brown nectar over the bacon for a second shot of sweet nirvana. The crowd roars. Your children fall prostrate in worship. And if your stunned campfire mates can handle the final touch, ditch those Granny-approved graham crackers for chewy oatmeal-raisin cookies.

Yes. You rule the campfire cosmos.

Catch a Bunch of Bullheads

Keep this simple. A garden worm or half a crawler under an egg sinker works. Use circle hooks, because a kid needs only to hold on and the fish will hook themselves.

Have them cast out and set the rods on sticks—then hang bells from the rod tips. Back at the fire, the kids have the glow of the flames and the chatter of their friends—but also the anticipation of a signal from the dark that tells them to rush into the void to do battle with something alive and mysterious on the other end.

Finally, bring some bubble gum as bait. Don’t laugh. It works. And if you let a kid catch a fish on his own chewed bubble gum, he’ll still be talking about it the next time you ask, “Do you want to go bullhead fishing?”

Make a Lean-To with Your Kid, Then Sleep In It

Since my boy could first walk, he’s helped stack firewood. He’ll pick up ribbons of fresh-split kindling, then lean the strips of wood against the drying ricks of maple and hickory. When the snow melted this spring and we picked up sticks in the yard, he did the same thing. Ambling over to a white pine on his 2-year-old feet, he leaned a stick against the sappy giant. It gave me an idea: I set a 5-inch-diameter black-cherry log in a weevilled split 5 feet up the pine to make an angled ridge pole. Then I dragged a few big branches from the woods and set them against that cherry brace. My boy caught on right away; we’ve added to our shelter with twigs, branches, and leaves.

As we were taking out the recycling one day, he walked off with a magazine and a milk jug to insulate, or decorate, the side of his little shelter. The whole thing is primitive as can be but solid, without lashings or tarp. My son can walk around inside it, or sit with me and read picture books in the shade. Come July, when the nights warm up here, we’ll unroll our sleeping bags and spend a night in Henry’s lean-to.

Written by Dave Hurteau for Field & Stream and legally licensed through the Matcha publisher network. Please direct all licensing questions to legal@getmatcha.com.