10 of the Best Weekend Backpacking Trips in the US 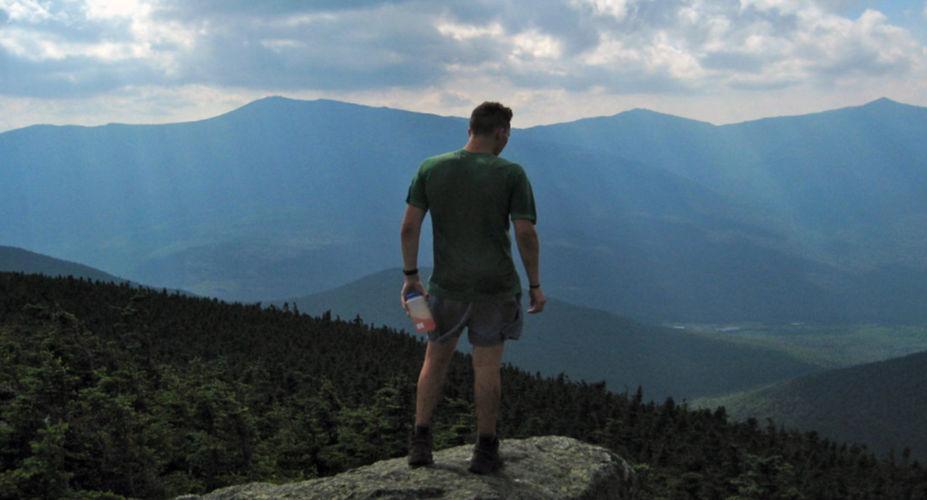 10 of the Best Weekend Backpacking Trips in the US

Easily one of the best ways to spend a long weekend, regardless of the time of year, is trekking a trail over rocky mountain passes, along breezy coastlines, or in deep, verdant woodlands. Whether you make plans to revisit an old favorite or knock a new one off your bucket list, backpacking always presents a memorable adventure.

From Southeastern classics like Roan Mountain, to New England treasures like a hut-to-hut trip in the Presidentials, to epic and challenging trails in the Tetons, here are some of America's greatest backpacking trips.

The view of Grand Portal Point from a distance (along the North Country Trail). Rachel Kramer

Situated in the upper Midwest, the Pictured Rocks National Lakeshore is a see-it-to-believe-it sort of landscape with towering sandstone cliffs, impossibly blue lake waters, waterfalls, beaches, and dense woodlands. It also happens to be home to a 42-mile section of the 4,600 mile North Country National Scenic Trail along the south shore of Lake Superior, stretching from Munising, MI, to Grand Marais, MN.

Backcountry camping is available at 14 campgrounds along this 71,400-acre linear park. In the winter, under the right conditions, mammoth ice caves form, attracting thousands of visitors.

The 4.4 miles of the lakeshore path between the Mosquito and Chapel rivers is the most popular section of the North Country Trail. It follows the cliffs through deciduous forest and over sandy sections within view of Grand Portal Point and Lake Superior.

Most hikers start and end their day hikes at Grand Sable Visitor Center on the north end. Further south, the Coves Group to Munising Falls is an ambitious 19.2-mile trek. Yet another option is to start at Munising Falls at the southern end and take a ferry to Grand Island National Recreation Area. A popular marathon and 50K is run around the perimeter of the island in July, switching from clockwise to counter-clockwise year to year.

Taking in the views of Lake Superior Adam Kahtava

The Superior Hiking Trail is a 310-mile long footpath in northeastern Minnesota that follows the ridgeline on the North Coast of Lake Superior.

Most accessible is the 40-mile southernmost section through Jay Cooke State Park to the northern boundary of the city of Duluth. There are no campsites there, and due to flood damage in 2012, parts of this section remain diverted.

To the north, however, is the 18-mile stretch from Silver Bay to Country Road 6 where views of the Big Lake and smaller glacier-scoured lakes are frequently in view through the birch and maple canopy. The colors peak in late September and early October, if you can time your trek then. (Avoid the trail in May and early June, when the clouds of mosquitoes and black flies at their thickest.)

This section of the SHT includes a short but steep climb up Mount Trudee to a 30-foot waterfall on the Baptism River. If you don't catch a glimpse of the deer, wolves, or mountain lions known to inhabit the region (don't worry; they're more afraid of you than you are of them), you may still see their tracks.

The views from these ethereal highlands are stunning and constant, and bring to mind visions of Scotland and Wales. Joe Giordano

Roan Mountain is a 20-mile massif that lies along the Tennessee-North Carolina border. It consists of five sub-peaks, and is divided into two sections by Carvers Gap. To the west of Carvers Gap are Roan High Bluff and Roan High Knob, with Tollhouse Gap and Rhododendron Gardens lying between the two peaks.

A 14-mile section of the Appalachian Trail traverses the Roan Mountain between Carvers Gap and Highway 19E along the northern border of TN and NC. Heading south from 19E, plan to hike 8 miles to the Overmountain Shelter, a.k.a. “The Barn.” Stay inside with other backpackers or pitch your tent in its vicinity. Either way, you’ll be waking to a spectacular sunrise over the valley.

Pack up and trek the final tough 5 miles over three balds. As you approach Carvers Gap, you'll cross Grassy Ridge, the longest stretch of grassy bald in the Appalachian Mountains.

Camping among the rhododendrons in Virginia's Grayson Highlands Jake Wheeler

Within southwestern VA lies the Jefferson National Forest. And within the forest lies Grayson Highlands State Park , a gateway to Mount Rogers and to a number of miles along the Appalachian Trail.

To summit Mount Rogers, the state’s highest peak at 5, 729 feet, there’s a 6.7-mile Mount Rogers National Recreation Trail from the Grindstone Campground six miles east of Troutdale. Or take the scenic 2.3-mile Wilburn Ridge Trail from the state park. There are no views from the forested peak, but on either route you’re likely to encounter wild ponies and clusters of exposed and inviting boulders.

In fact, both AT thru hikers and day visitors would do well to check out the bouldering scene in the Grayson Highlands. The Listening Rock Trail offers the most bouldering opportunities, followed by the AVP and Boneyard areas. Climbers take in beautiful top-outs, especially after conquering the Highland Highball, in the Highlands Bouldering Area.

Backcountry camping is not allowed within Grayson Highlands State Park, but camping is allowed in the Mount Rogers National Recreation Area (MRNRA). Hikers traveling north on the AT exit the park when they cross Big Wilson Creek. You’re welcome to camp across the creek, just past the Wise Shelter fence.

Knowing you start the trek at 4,000 feet makes the multiple 5,000-foot peaks a little less intimidating. For the AT, the Standing Indian trip is a moderate hike. All the better, as the views along the way are some of the most stunning you'll find in the Smokies.

From the Standing Indian Campground, travel up the Long Branch Trail until it connects with the AT. Mt. Albert is only 5.5 miles from the trailhead, but plan to spend your first night at the summit. In the morning, drink in the panoramic view before descending to Carter Cap, where there's a shelter and water. Expect to spend most of the day walking along a ridge with sweeping views.

Gradually you’ll make your way to the treeless and spectacular peak of Standing Indian itself. There is one small campsite on this bald, so if you want to snag it, you'll need to begin your second day very early in the morning.

On your final day, head back down to the Standing Indian Campground on the 7-mile Kimsey Creek Trail through dense hemlock groves and rhododendron tunnels. Keep in mind that in the early spring months, you’re likely to find snow and ice on this side of the mountain.

The Long Trail, the oldest long-distance hiking trail in America, is a 272-mile footpath that follows the main ridge of the Green Mountains from the Massachusetts-Vermont stateline to the Canadian border. The Long Trail stretches the length of Vermont and crosses the state’s highest peaks.

It can take nearly three weeks to thru-hike the Long Trail and the 53 mountains (27 of which are 3,500 feet or higher) along it. It can be tackled section by section, too.

One of the toughest sections, the 23 miles from Birch Glen Camp northwest to the Buchanan Shelter, includes 8,000 feet of climbing and descending—including 1,700 feet at a 17 percent grade to the summit of Camels Hump. The exposed scramble over rock slabs pays off with views of Lake Champlain and the Adirondacks to the west, Mount Washington to the east, and Mount Mansfield to the north.

The descent along the ridgeline bottoms out with a 3.6-mile hike to the outskirts of Jonesville, VT. Stay overnight at the Duckbrook Shelter or wait to camp on the western slopes of Bolton Mountain at the Buchanan Shelter. There are six shelters along this stretch, thanks to the Green Mountain Club which built the trail between 1910 and 1930 and maintains it to this day.

The Presidential Traverse in the White Mountains of New Hampshire is nearly 23 miles long with close to 9,000 feet of elevation gain. Best hiked from north to south, to bag the highest of 10 peaks first, the traverse demands a dawn-to-dusk effort if you don’t have three to four days to spare.

The traverse is almost entirely above the treeline, where the whiteout conditions are common and can cause one to turn back. Besides the right apparel, a map and compass are essential.

The first day is the toughest, with 4,000 feet to climb over the 3.8-mile Valley Way Trail to the peak of Mt. Madison. Continuing south on the Gulfside Trail, backpackers summit Adams and Jefferson to earn the right to lie down in the grass of Monticello Lawn.

Appreciate the rest, because Mt. Washington—the highest peak in the White Mountains—is next. Expect bad weather before reaching the snack bar at the summit, which tourists reach by road and rail.

From there the climbing is largely over, while the views of the southern Presidential range are not. The Crawford Path, the oldest continually maintained footpath in the U.S., leads to the Lake of the Huts and Mount Monroe. The going only gets easier past mounts Franklin, Eisenhower, Pierce, and Jackson.

With roughly 600 miles of trails, there are essentially endless opportunities for backpacking in Olympic National Park David Fulmer

At 1,442 square miles, Washington's Olympic National Park is nearly twice as large as Great Smoky Mountain National Park, and 300 square miles larger than Yosemite. The park has more than 600 miles of sensational trails, the majority of which are designated wilderness by the National Park Service, and 60 miles of craggy and picturesque coastline.

The backpacking options are numerous, but summitting Mt. Olympus, the tallest peak in the park, is a must. A campground within the park’s Hoh Rainforest is open year-round, so stay there and you can also enjoy backpacking the trail to Royal Basin and the Upper Royal Basin beyond where unparalleled views of glacial mountains and tarns await.

Easier hikes, from LaPush to Shi Shi and the popular Ruby Beach, are also often rewarded with whale sightings.

Backpacking along Paintbrush Divide, arguably the most scenic stretch along the Teton Crest Trail Brian Saunders

If the Teton Crest Trail is not on your bucket list, it should be. Check it off by taking on the 25-mile section between Death Canyon to Cascade Canyon, and conquer the Alaska Basin and Hurricane Pass in the process.

The Phillips Pass Trailhead, halfway up Teton Pass, is the place to start. Plan to camp at Alaska Basin where a permit is not required because it lies just outside the boundaries of Grand Teton National Park.

The Old Rag Loop is the most challenging of the more than 500 trail miles within Shenandoah National Park in VA. It may be only 10 miles, but it takes 8 hours to complete, according to the National Park Service. They're not joking.

The most popular way to hike the Old Rag Loop is up the Ridge Trail, across the rock scramble to the summit, than down the Saddle Trail to the Weakley Hollow Fire Road.

The first two miles of the wooded trail gets increasingly steeper, and the vegetation changes noticeably. Once you're out of the woods onto the ridgetop, the scrambling over giant granite boulders begins. From the summit, you can breathlessly drink in the 200,000-acre expanse of the Shenandoah National Park, a portion of which is federally designated wilderness.

From here it is advisable to take the Saddle Trail, a fire road, back to your vehicle. It's 1.2 miles longer but much flatter and quicker.

Written by Joel Patenaude for RootsRated in partnership with Superfeet.