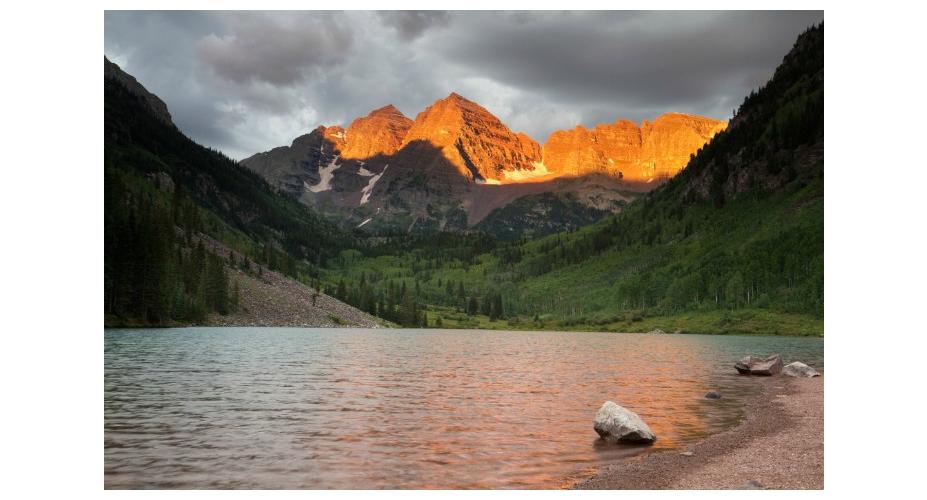 Per capita, the sensational views on mountain trails in Colorado is, literally, sky high. Trails explore deep forests, high mountains, tranquil deserts, and alpine meadows. For the aspiring trail runner, this is a bounty of adventure that offers a lifetime of possibilities.

You don't have to be an elite ultramarathoner or seeker of the fastest known time (FKT) on a given 14er to enjoy the trails. The average fit, fast-packing citizen can take any of the following trails to huge visual payoffs.

Running along the foothills of Boulder, from Chautauqua Park at the north end to Eldorado Canyon Road to the south, the Mesa Trail is a great option. Run it in out and back for a 12-mile outing with 3,250 feet of climbing. You’ll spend most of your time around 5,500 feet, but peak at an elevation of 6,465 feet.

Most of the middle miles of the trail cuts through old-growth forest, so it’s shaded. But a mile or two on both ends are exposed, so slather on the sunscreen. From the Chautauqua trailhead, you can add a mile by taking the even more scenic and challenging Bluebell Trail detour. In any case, expect to see rocky outcroppings and the city below this popular trail.

As an added bonus, runners can make spectacular loops by splitting off several trails, such as Fern Canyon, Shadow Canyon, and the Green-Bear Trail, to get above Boulder's iconic Flatirons and add some serious elevation to their runs. These trails all feed into the Mesa Trail as it skirts the base of the mountains.

A 40-minute drive west of downtown Denver is Mount Falcon Park near Morrison. There are many trails here with fantastic views of the Front Range, Red Rocks Amphitheater, and Denver proper. Some are flat and wide, friendly to mountain bikers and jogging strollers, while others include more strenuous ascents. Runs of three to nearly eight miles can be had by combining trails.

The park includes the remains of the home of John Brisben Walker, who developed the Red Rocks Amphitheater. The foundation of the summer home Walker began to build, intended as a retreat for for U.S. presidents, can also be seen. It was this structure that cost Walker his fortune in the 1900s.

The Turquoise Lake Nature Trail just outside Leadville is gently rolling but remains challenging due to it’s location 10,000 feet above sea level. With several 14ers as a backdrop, the 12-mile out-and back trail hugs the shoreline of the calm lake. Its epic feel intensifies with the knowledge that the storied Leadville 100 ultramarathon course uses this path twice (at the 10- and 80-mile marks).

The trailhead for Argentine Pass (13,207 feet) is at the end of the easy 4x4 Peru Creek Road near Montezuma in Summit County. The pass follows the crest of the Front Range of the Rockies and crosses the Continental Divide. From the top of the pass, strong runners can continue along the ridges to 13,743' Argentine Peak, 13,856' Mount Edwards, or even all the way to  14,278' Grays Peak.

The distance to the ridge on the Horseshoe Basin side, accessible only by foot or mountain bike, is 2.6 steep miles; the climb gains 2,000 feet. The trail then continues up Argentine Peak to the Continental Divide. The trail is rocky but in good shape, making it prime terrain for high-altitude adventures. It's also possible to run from the east side of the pass starting at the Waldorf Mine 4x4 road and trailhead.

As you run it, try to imagine the original Argentine Pass Trail as the wagon trail it was in the late 1800s between Georgetown and the mining camps on the western slope of the divide.

The six-mile Durango area loop that starts with 2.5 miles up Animas Mountain is a rocky grind that demands concentration. But the trail around the top of the hill delivers great views of Durango, the Animas River Valley, and the La Plata Mountains.

The Lost Man Loop connects two trailheads along Highway 82 close to Independence Pass. The Lower Lost Man Loop starts in the woods before it climbs and opens up into a stunning alpine meadow valley. High ridges run in just about every direction from here. Aim to reach Upper Lost Man Lake to see Geissler Mountain, Twining Peak, and the surrounding summits. Avoid this trail in the spring when there’s still snow above the treeline and muddy meltwater running down the trail.

This difficult but popular trail offers a 9-mile trip from in the Brainard Lake Recreation Areaof the Indian Peaks Wilderness to Pawnee Peak and back. The 12,943' peak, just a half mile off the trail, rewards with sweet views of the Indian Peaks and Wild Basin Area of Rocky Mountain National Park. Before turning back, continue west on the main trail to the sign indicating the Continental Divide at the top of the pass and Pawnee Lake   comes into view .

Beginning at Camp Dick Campground a few miles north of Ward, the initially flat Buchanan Pass Trail runs nine miles west, partly along Middle St. Vrain Creek, to Buchanan Pass (11,837 feet) on the Continental Divide. View Timberline Falls from above, but watch your step as you do so. A dicey foot bridge leads to Coney Flats, a marshy area where you may catch sight of moose. Above a talus field a little farther on, you'll see Sawtooth Mountain, the Indian Peaks to the south, and Longs Peak in Rocky Mountain National Park to the north.

Connecting the small mountain towns of Telluride and Ouray is Imogene Pass, a 17-mile dirt road. The towns sit at elevations of 8,750 feet and 7,810 feet respectively, but the pass between them reaches 13,114 feet, the second highest in Colorado.

The Imogene Pass Run from Ouray to Telluride, held every April, has long served as a training run for the Pike’s Peak Marathon. Seeing as Imogene Pass runners find themselves well above the treeline, it’s easy to understand why.

You could take a leisurely three to four days, like many backpackers do, to cover the 26.4-mile Four Pass Loop through the Maroon Bells-Snowmass Wilderness and not be disappointed. You could also run this route as a marathon (plus .2 miles) and put a notch in your Fuel Belt for each of the four 12,000-foot passes you conquer. If you do the latter, promise to take time to stop and drink in the Maroon Bells—among the most photographed peaks in North America—waterfalls hundreds of feet high, and mountain lakes rimmed with wildflowers.

Start the loop at Maroon Lake in either direction, although most hikers do it clockwise for the easier initial ascent and best scenery at the end.

The Crag Crest National Recreation Trail is a 10.3-mile loop that takes in Grand Mesa, said to be the world’s largest flat-topped mountain. The 350,000-acre Grand Mesa National Forest east of Grand Junction includes some 300 lakes, deep pine forest, and lots of trails.

The 6.5-mile trail to Crag Crest (11,189 feet) follows a narrow ridge with steep drop-offs. From Leon Peak, the highest point, are grand views in all directions of the Elk, Uncompahgre, Lizard Head, and Raggeds wildernesses. Also visible are five 14'ers in the San Juan Range. And on especially clear days runners can see out to the La Sal Mountains in western Colorado and eastern Utah.

A 3.4-mile loop section, where mountain bikers and horseback riders are allowed to join those on foot, is a means of returning to Eggleston Lake, 1,000 feet below on the east end of the mesa.

A crucial and dreaded section of the Leadville 100 course (there’s a reason the aid station just shy of the peak is called “Hopeless”), this 9-mile out-and-back route connects other trails from the Willis Gulch Trailhead about 25 miles southwest of Leadville. Hope Passrunners gain 4,500 feet to views of Missouri Mountain, Mount Belford, Mount Oxford, and Huron Peak.

The Meadow Creak Trail leads to Eccles Pass (11,918 feet) in the Eagles Nest Wilderness north of Frisco. It’s a little more than five miles to the crest, where you can look down into the Meadow Creek Valley and beyond to Red Peak and Buffalo Mountain, as well as the Gore and Tenmile ranges.

The hike starts with a climb through dense forest but opens up on an alpine meadows before reaching the pass. Expect about 2,700 of climbing and be prepared for wild weather at the top.

A “runnable” 14’er, Huron Peak (14,003 feet) beckons from the Collegiate Peaks Wilderness Area of the San Isabel National Forest. The main approach is from the Clear Creek/South Winfield Trailhead 20 miles south of Leadville and 14.5 miles north of Buena Vista.

From the 2WD parking lot at Winfield Ghost Town, the trek is an 11-mile round trip. But if you have a vehicle that can get you to the trailhead, you can shave 3.25 miles off your hike, although you’ll still have 3,500 feet of climbing to do.

Take a break there to view Browns Peak (13,523) before continuing on to the peak. The final stretch is a bit tricky but not enough to keep you from bagging this summit and being able to say you looked down on the down on the 13’ers of the Three Apostles—North Apostle, Ice Mountain and West Apostle.

With grades as steep as 68 percent on its short ascent, the Manitou Incline is less a running trail than a physical challenge very popular among overachievers in the Colorado Springs area. At its base in Manitou Springs, the elevation is 6,600 feet. The top is only .88 of a mile away but a 2,000-foot climb.

The trail was built in 1907 as a funicular railway to a hydroelectric plant and water tanks at the top of the mountain. It was in operation until 1990 when a rock slide took out the tracks and the railroad company opted not to repair them. Railroad ties now serve as steps for intrepid climbers. From the top, hikers descend on Barr Trail, a much gentler three-mile descent. Climbers can bailout on the Barr Trail two-thirds of the way up, just before the climb is at its steepest.

It should come as no surprise that scaling the Manitou Incline is a popular feat to undertake, and repeatedly, by residents of the large military bases and U.S. Olympic Training Center in Colorado Springs. Records are kept for the fastest and most frequent summits.