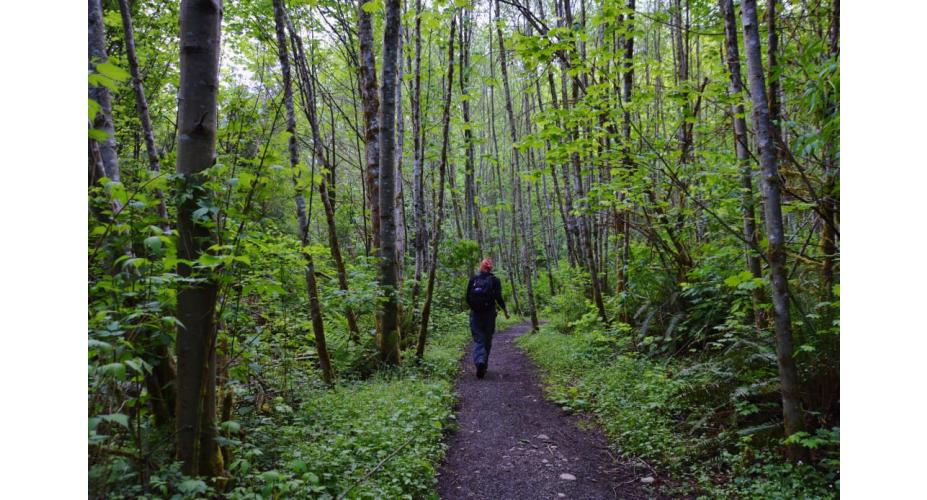 Seattle is coined as being an original epicenter for ultra-running elites as well as one of the world’s best cities for the everyday trail runner.

“We are a social city with a world-class trail system, including hundreds of miles of trails accessible within 30 minutes of the city,” says Phil Kochik, owner of Seven Hills Running Shop in Seattle. Because of Seattle’s social scene, it makes is easy to find plenty of other people to run with. “It’s like one big extended family and a trail-running clubhouse for all levels of runners,” adds Kochik.

Many locals give credit to this extended family-like trail running culture to Scott McCoubrey, who started the now-legendary Seattle Running Company. It became a community that drew people together, including ultrarunning elite and author of Eat and Run, Scott Jurek, who reached the peak of his ultra-running career while living and training in Seattle. “You could grab any runner in Seattle and ask them about Seattle Running Company and they would say that’s where the trail runners go,” Kochik adds.

Local groups and clubs have exploded in the last decade, including Seattle Mountain-Running Group, Seattle Running Club, and women’s specific High Heel Running Group, all offering group runs taking place year-round. “These groups are slam dunks for newer runners to get into the sport,” says Kochik.

Race options have also grown aggressively with varying degrees of distances. “The mix of short and long distance options provide the chance to progress towards longer distances, or it just gives you more chances to run together with friends,” says Kochik. Evergreen Trail Series, Northwest Trail Runs, and Rainshadow Running are getting lots of good buzz and are well attended.

“Mountain running is big on the Eastside,” says Koachik. Roughly 30 minutes from Seattle, these mountains offer numerous options for routine and intense training, as well as practical convenience for an evening run after work. The Issaquah Alps include the popular Cougar-Squak-Tiger Mountain Corridor, encompassing thousands of acres of forest. With a plethora of singletrack trails, trail runners will find just about everything from merciful bends to fierce climbs never falling short of vast views of the encompassing valleys. Runners can even get creative and spice up their adventure by mixing trails on these three mountains.

Of these mountains, Cougar Mountain is the best mapped and easiest to navigate. This 3,100-acre park is often referred to as the Grand Tour, including 36-miles of lavish trails with mostly moderate climbs. In 2012, Runner’s World magazine named Cougar Mountain among the 25 best places for trail running in the United States.

Tiger Mountain has great views and is known as Seattle’s favorite loop due to its all season/all weather calendar, offering ample running terrain including over 70 miles of trails and as much elevation gain as you could ever want. There are three summits and each one goes straight up and straight down. Tiger is often used for intervals training due to the epic ascents.

If you head roughly 10 miles east, you will find the four-mile out-and-back trail, Rattlesnake Ledge , a well-loved and popular gem in the eastern Issaquah Alps for both trail running and hiking. With 1160 feet of elevation gain and uninterrupted uphill terrain for two miles, Rattlesnake makes an excellent option for training. Northwest Trail Runs puts on the Rattlesnake Trail Run , which includes a 5-mile, half marathon, and 50K trail option.

Just south of Bellingham are the Chuckanut Mountains, where runners will enjoy a jumble of trails on 8,000 acres with views of Mountain Baker and Bellingham Bay. The Bellingham Trail Running Series includes boisterous races, including the historic Chucknanut 50K , which celebrated its 27th year in March 2019.

The Chuckanut Ridge Trail, a real mountain trail, broken up into 3 sections, has been a famous contributor to Chuckanut’s stellar views and singletrack sweetness. It’s noteworthy for its motley running conditions, offering almost every style of terrain, as well as wicked ascents and descents. It’s a swift run (roughly 2.5 miles long) and welcomes all levels of runners. However, it will give every runner a natural interval workout due to its quick bursts of ups-and-downs. Be sure to checkout Chuckanut Falls while you are there, as this peaceful trail takes visitors down to the water.

Seattle is lucky to have an abundance of dense, evergreen parks conveniently located right within the city offering trail runners options to get into the woods without leaving their home turf. According to Kochik, “these little gems tucked into big bustling neighborhoods offer various distances, whether you are new to trail running or a veteran looking for maintenance miles.”

Ravenna Park is located just north of Seattle’s University District and offers a nice, short run of 4.5 total miles, including wetlands, forests, and an all-around active community of other like-minded runners.

Discovery Park is a favorite for Seattleites looking for a hearty route, scenic views, and diverse terrain that’s close enough to the city to run any day of the week. Located in the Magnolia neighborhood, Discovery Park has over nine miles of trails with a few options to mix up the distances.

If you live on the Eastside of Seattle, both Bridle Trails State Park and Saint Edward State Park provide remarkably well-maintained trails. Bridle Trails State Park has a total of 28 miles of trails with three main running routes that are relatively flat. All three routes are great options for runners looking to do moderate workouts or recovery runs. If you head a little further north to Saint Edward State Park, you will be greeted with more than seven miles of trails offering scenic and challenging ascending and descending terrain – enjoyable options whether you are looking for shorter pre-workout run to or hours of running to unwind.

Written by Kristin Wuhrman for RootsRated.