Feast on the 10 Best Turkey Trots in Chicago 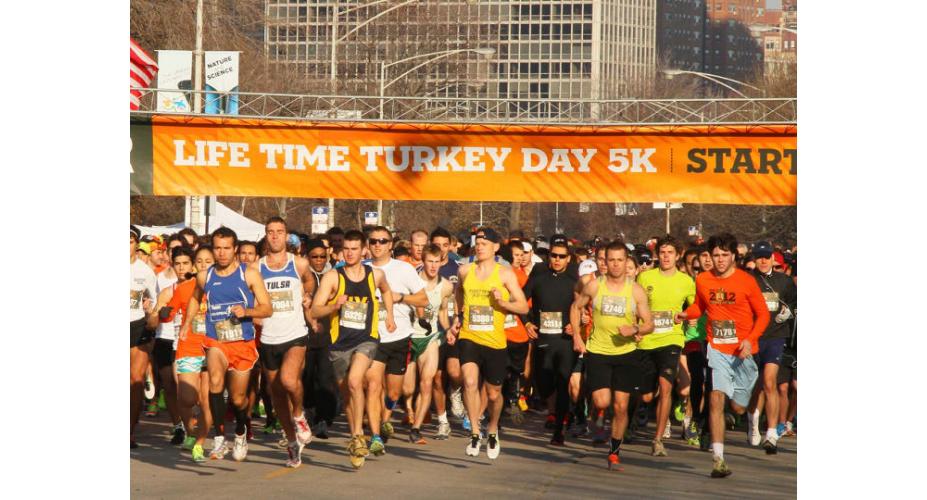 Feast on the 10 Best Turkey Trots in Chicago

Turkey, football and family. You may rank those in any order you like, but for most people the fourth Thursday in November means checking them all of them off the list. Runners add a fourth—competing in a turkey trot race to burn some calories in advance of the big feast. Here are our 10 favorite turkey trots in Chicago (and the surrounding suburbs) that offer plenty of reasons to get up early and start the holiday off right.

The biggest turkey trot in the city of Chicago, the Turkey Day 5K and 8K will draw runners to its Lincoln Park course for its 39th running this year. The family-friendly event features 5k and 8k runs in addition to a kids' race along the Lakefront. The "Turkey Tailgate Zone" features turkey bowling, a football throw, beanbags, and a kids activities tent. The race benefits the Chicago Food Depository, and all runners will receive a long-sleeve technical T-shirt.

The North Shore Turkey Trot , organized by RAM Racing, starts and finishes in downtown Highland Park and features both 5k and 10k distances. It's grown into a big event, with more than 3,500 runners participating. RAM is known for its premium giveaways, and this year is no different, with a fleece trappers hat that will come in handy all winter. Let's hope you don't need it on race day. The race benefits Black Diamond charities, which supports returning veterans transitioning to civilian life.

The 19th annual Fox and Turkey Races start in downtown Batavia and feature a course along the Fox River. Choose from the 4-mile race or a 1 mile youth race for kids 12 and under. All runners receive a lightweight hooded sweatshirt, and hot chocolate will be served after the race along with snacks. Nonperishable food donations are also encouraged on race day, benefitting the Batavia Interfaith Food Pantry.

Organized by the Naperville Noon Lions, this annual turkey trot through scenic neighborhoods around downtown Naperville attracts 7,500 runners, making it one the largest turkey trots in the state. The 5K starts and finishes at Naperville Central High School, and all runners receive long-sleeve performance T-shirts. After the race, enjoy a pancake breakfast in the high school cafeteria. The race draws all types of runners, with the guys from North Central College's cross-country team often setting a fast pace, but plenty of participants dressed in costume or walking the course following.

The Beat the Bird is an off-road 5K through Fullersburg Woods that also has runners predict their finishing time. You'll get a start on the Thanksgiving meal early with Standard Market catering the event with gourmet snacks and Two Brothers Beer providing the post-race liquid refreshment. The race benefits the Chicago Hope Academy, a near West Side nondenominational college and life prep school that helps deserving youth in the neighborhood.

Be one of the first 750 people to enter the Rotary Run 3.14 Pie Run, and you'll leave with dessert—a Sara Lee pie to add to your Thanksgiving feast. The run itself starts and finishes at Lyons Township High School in LaGrange and features a route along the tree-lined streets of the village. All adults receive a technical T-shirt, and the race benefits the Rotary Club of LaGrange.

This 32 nd  annual Thanksgiving Day tradition in Elmhurst has to date raised more than $3.5 million for hunger-related charities in DuPage County, providing more than 4 million meals. The 5K course runs on the streets of downtown Elmhurst with the start and finish near Elmhurst College and Wilder Park. And before the race begins, runners will be treated to a fly-over from the Lima Lima flight team.

Run through the Northwestern University campus with more than 2,000 other runners at the Flying Turkey 5K in downtown Evanston. The race features a start and finish at Centennial Park near Clark Street Beach, and runners will receive a winter hat for their effort. Awards will be given to the top three in each age group as well as the top three men and women overall. Canned food donations also be accepted on behalf of the Harvest Food Closet.

The 34 th annual Poultry and Pie Predictor takes place in Pilcher Park in Joliet. Runners predict their finishing time before the race, with the top 15 closest receiving a turkey, the next 25 receiving a pie. There's also a 1-mile kid's race and a Toddler Gobbler sprint for those 5 and under.

The Long Grove Turkey Trot isn't one of the older races in the area (its sixth running is this year), but it's quickly becoming a favorite. Run through the historic streets of Long Grove and finish through the town's covered bridge. Choose from either a 5k or 8k course, and all participants receive a hooded sweatshirt. A band will provide live music at the finish line and post-race party, and the event benefits the Northern Illinois Food Bank.

Written by Jeff Banowetz for RootsRated and legally licensed through the Matcha publisher network. Please direct all licensing questions to legal@getmatcha.com.