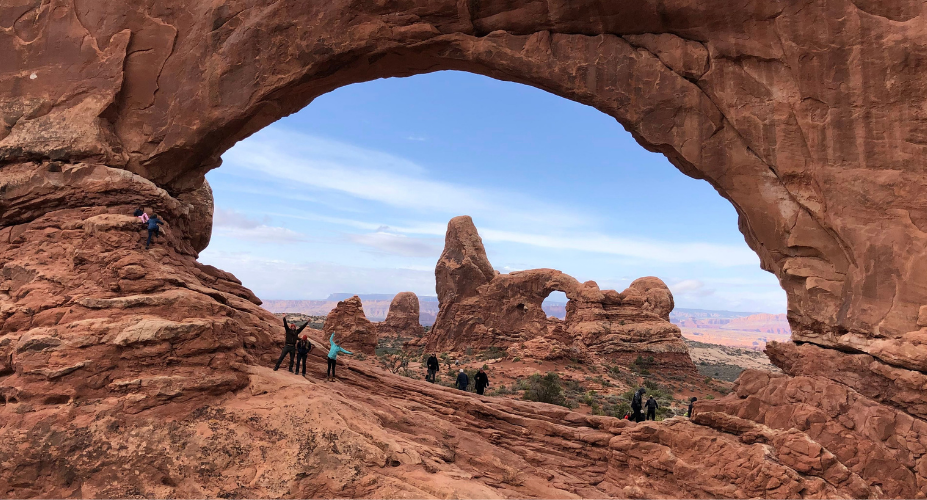 Written by: Shannon Mahre. Shannon is a professional photographer, writer, coach, athlete mom and wife based in Washington state. She enjoys running ultra-trail marathons. Shannon, along with her husband Andy, own MADE (Mahre Athletic Development Experience) and teach adventure clinics, retreats, classes and events for the entire family.  Find Shannon on Instagram: @shannonmahre.

I first heard about the Rim 2 Rim 2 Rim (R2R2R) a few years ago from a friend whose wife was planning to run it. It sounded beastly, which drew me in right away.

At the time, I was pregnant with our second child — so I decided to put this adventure on the calendar for the following year as a goal that I would try to accomplish when our youngest son would be about 15 months old.

Fast forward to the winter of 2020-21, when I began planning my training schedule to ensure that I would be more than prepared come October 2021, my planned timing for running the R2R2R. I was already running between 40 and 60 miles per week on average, but I knew that I would need to add in more strength training as well as vertical training to my current routine. During the ski season, I am at the mountain coaching and skiing five to six days a week so although I continued to run throughout the winter months (on the treadmill, on the trails and at the track), I didn’t dive into my real training for the R2R2R until April when my trips to the mountain lessened.

To also ensure that I would get some long runs under my belt that were work related, I signed on as a guide for Evergreen Excursions — more on that later.

When April hit, I revved up my training, making sure that I was at least hitting the trail two to three days a week (trail running and mountain biking), and hitting the track one day a week for speed work (speed work plays a HUGE role in long distance running).  I also added in three days of strength training, using 10 to 20 lb free weights at my house. Then, on April 24th, I rolled my ankle extremely badly — which ended up sidelining me for a few weeks. As soon as I could, I began mountain biking, then slowly (while listening to my body) began hiking, then jogging, then running again.

With my other coaching beginning in late spring and early summer (trail running, River SUP & mountain biking), I began to spread out my cross-training to include River Stand Up Paddle Boarding and even more mountain biking to keep my ankle happy as I continued to build all of my strength back. One of my first big runs back after my ankle injury was my first trail running excursion that I guided of the summer in the beginning of August — it was 20 miles at Ross Lake with a low elevation profile. I was stoked to finish that day feeling great, and like I hadn’t even run far at all.

Just a week later, my next two big training runs hit. They were back-to-back 20-mile runs — with more than 9400 feet of vertical over the entire 40 miles. And when I felt GREAT after these two days in the mountains, I knew that my training was on point for my 40-miler coming up in September. One of the things to keep in mind when training for ultras is to always check in with yourself after long or even just “difficult” runs. By making time to listen to your body, REALLY listen to it, you can gauge if your training is not enough, if it’s too much or if it is pretty spot on.

As I continued my training into September, I did one more hefty training one with high vert before I slowed WAY down a week prior to my 40-miler to ensure that I would be rested and ready for the next excursion I would be guiding in the North Cascades. Lots of food, water and a ton of positive energy and stoke got our crew through that day, which ended up being about 42 miles and over 9000 ft of vert. And when I felt stellar post-run that evening, I knew I would be more than prepared for our R2R2R which was set to happen just one month later.

And throughout ALL of this training, I was eating… A LOT. My main focus for calories were protein and fats, because those are what I lack most in my everyday cravings. I cannot push this enough — you must eat enough calories to keep your muscle and not lose it when you are training, no matter the distance. The biggest problem that my clients have with weight management and with training is that they don’t eat enough.

Since my husband, Andy, and I hadn’t been on a trip together that wasn’t work related since prior to having our first child (who is now 5 1/2), I decided to make the R2R2R just one day of adventure among a 10 day road trip. Andy and I dirt biked in Fort Valley for the two days prior to my run, and I even got the chance to go for a run on the beautiful Arizona Trail. (P.S. Flagstaff is RAD!).

Then the day came to conquer the mighty beast that is the R2R2R!

With my friends, Mary and Solveig, we started at the South Kaibab Trailhead as we descended down into the canyon in the dark. The sun came up as we made it to the mighty Colorado and passed Phantom Ranch, and we got to wind our way through the canyon with perfect temps, cheering on everyone we met along the way. The ascent up the North Rim was difficult, but absolutely stunning, and SO different from the South Rim! A quick sock change, water fill and sandwich break and we were off again, making our way back the way we had come. We continued spreading the stoke the entire way back to the South Rim, even when the temps increased and the hours on our feet began to come to our attention. Once we made it back to Phantom Ranch, we took the Bright Angel trail turn-off to begin our final eight mile ascent to get ourselves back to the top of the South Rim. When we were just a few miles from the top, darkness descended upon us — but that didn’t stop the three of us from pushing on, stoked to be so close to accomplishing our goal.

The day after our run, I felt great — my legs weren’t even sore. But, I did eat like a horse for at least a week!

I honestly will never forget what it felt like to get to the top of that South Rim for the second time that day, and to hug my two friends that had accomplished this crazy goal with me — this adventure that will be with us now, forever.