Introducing One of the Best Undiscovered Half Marathons in Washington State 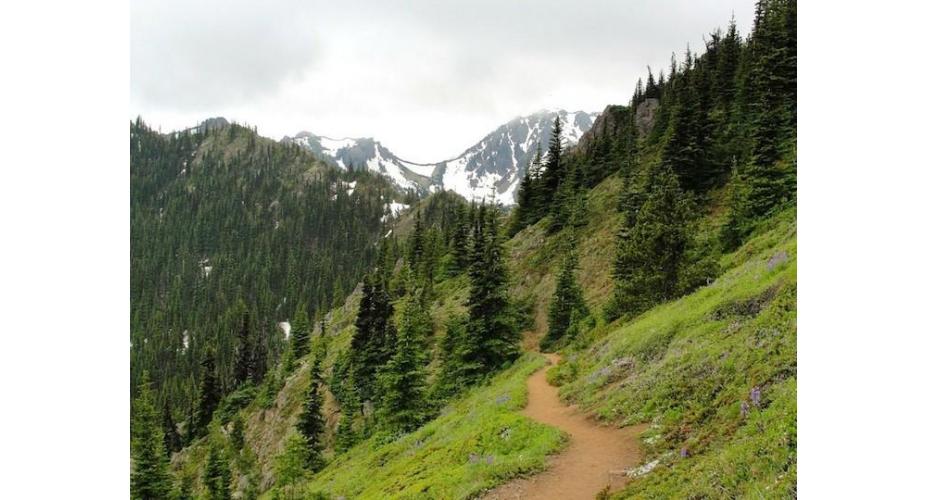 Introducing One of the Best Undiscovered Half Marathons in Washington State

Finding a good trail run in Olympic National Park can be surprisingly tough—especially if you're addicted to views. Sure, you could run the 500+ miles in the lush rainforests and dense wilderness areas of the park, but many of us look for a trail run that delivers more than that. Many of us look for those jaw dropping panoramic views, those lofty, life-giving punches of euphoria that only a mountain run can offer.

And luckily, tucked in the northeast corner of the Olympic Peninsula, in the heart of the Buckhorn Wilderness, there is such a trail. A 13 mile, not-well-known path that offers one of the greatest trail runs in all of Washington State.

A little over two short hours drive from the bars on Capitol Hill, you can have your feet on a trail that takes you through forests, alongside picturesque creeks, and up to one of the best views in the Pacific Northwest. The trail to Marmot Pass and Buckhorn Mountain will leave you breathless, not just from the elevation gain, but from the truly inspiring views.

The trail to the summit of Buckhorn Mountain works its way up to 6,988 feet above sea level, gaining 4,477 feet along the way in approximately 13 miles—the perfect distance and elevation gain for any trail runner seeking a manageable challenge.

The trail starts from a large parking lot after miles of driving along a mostly paved Forest Service road. A privy is available, but aside from that, the trailhead is in the middle of the woods with zero cell service. The elevation gain starts out immediately, but soon smooths out into a steady gain, weaving though rhododendron-filled forests that flank the Big Quilcene River. For 2.6 miles, the trail gains 1,489 feet before arriving at the backcountry camping area known as Shelter Rock. From here, the trail becomes much steeper, gaining nearly 3,000 feet over the next 4 miles.

As you continue to gain elevation, the river drops far below, with the the rhododendrons quickly being replaced by small forests of large fir trees and an increase in rocky sections full of slide alder and wildflowers. This section marks the first bit of exposure on the trail, giving views to the east of the Big Quilcene River Valley behind you and the steep ridges on either side of the river.

Climbing higher, evidence of the harsh winters becomes evident with small areas of loose rock and scree, before the trail eventually reaches Camp Mystery, a remote backcountry camping destination along the trail. This area is typically your last reliable source for water, so make sure to filter and fill any hydration bladders or bottles you are running with.

Past Camp Mystery, the trail to Marmot Pass and Buckhorn Mountain becomes quite memorable. While the previous 4.6 miles may have felt similar to other trails in the Olympic Mountains, the next 0.7 to Marmot Pass will be a place you revisit in your day dreams. Gaining 600 feet, this section of the trail passes through large boulders and gorgeous valleys while working up to the saddle of the ridge, best known as Marmot Pass.

Marked with an iconic wooden sign, the views from Marmot Pass are beyond words, often leaving runners and hikers new to the area standing on the trail, slack jawed from the panorama. Along the summit, mountain goats are commonly seen, as are the marmots for which the pass is named. Once you've taken in the views, the trail to the summit of Buckhorn Mountain starts to the north.

This trail can be a bit tricky to see, but the general rule of thumb is to follow the path to the north for about a hundred feet and look for a small boot path heading directly up the steep flank to the northeast. Basically, if you're heading straight up, you're on the right trail, as the path to the summit gains 988 feet in roughly a mile.

The path is rocky and occasionally difficult to get great traction, but after a few hundred feet of elevation, you reach the false summit and footing becomes much more reliable. From here, the world expands in every direction, making the last bit of the run a breeze, the fatigue replaced with airy euphoria. As you reach the final push to the summit of Buckhorn Mountain, slow your pace down and enjoy the last few minutes before reaching the top. The trail to the true summit should be easy to follow, but by slowing down, you increase your chances to share the summit with marmots or mountain goats.

Once on the summit, take in the glory of the wilderness views, which expand from the 23rd highest peak in the Olympic Range.

With stunning views of Mount Constance, and glimpses of the Cascade Range and Puget Sound, Buckhorn Mountain becomes more than just a peak. It becomes a place that will be forever locked in the memory, and more than likely, it becomes your favorite half marathon route in the world.