National Parks Too Crowded? Visit These Nearby National Forests Instead 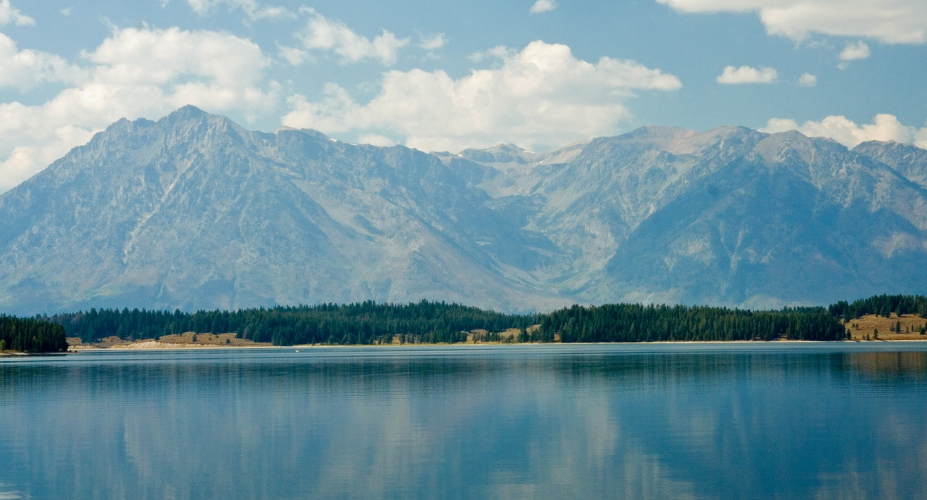 The national parks of the United States account for some of the world’s most glorious landscapes: ice-whittled peaks, abyssal gorges, primeval seashores, towering forests, kaleidoscopic deserts—well, you probably don’t need us to repeat the litany of superlatives, now do you? Tens of millions from all over the globe partake of the National Park System’s majesties every year—from the Everglades to Denali, from Death Valley to Congaree.

Amid this thoroughly well-deserved adoration for these sacred places, it’s also worth exploring the national forests that often border the parks—especially if you’re looking to duck at least some of the crowds. Taking a gander at adjoining Forest Service lands lets you see the topographic and ecological whole of which a given national park is just a component of. After all, it’s easy to mistake Arches or Shenandoah as standalone chunks of natural majesty, forgetting that mountain ranges and rivers and animals and weather don’t abide by sharp jurisdictional boundaries.

And on the other side of the coin, crisscrossing the national park/national forest borders helps you better appreciate how different management strategies cooked up on paper actually make their physical mark on the landscape. (The National Park Service and the USDA Forest Service, after all, have distinct, if overlapping, guiding principles, and it’s illuminating for any outdoors-person to consider the on-the-ground differences.)

Here’s a broad-stroked roundup of the national forests shouldering 10 of the most-visited national parks in 2018. (One popular park, Maine’s Acadia saw more than 3.5 million visitors in 2018, but it isn't part of this list as it doesn’t have adjacent federal lands.) The forestlands profiled here serve as promising options for finding some elbow room near some of America’s best-loved outdoor playgrounds, and they’re home to some truly world-class scenery and recreation all their own.

Home to some of the world’s richest temperate forests and some of the East’s highest peaks and most extensive backcountry, Great Smoky Mountains National Park is a marvel—one appreciated firsthand by more than 11.4 million people in 2018.

More Southern Appalachian magic awaits, though, in the national forestland bordering the park to its west, south, and east. Bliss out among giant tulip trees and other barrel-trunked ancients in the old-growth cove-hemlock forest of the Joyce Kilmer-Slickrock Wilderness. Run the whitewater of the Nantahala, mountain bike the Tsali Recreation Area along Fontana Lake, or goggle at Bald River Falls in the Bald River Gorge. Wherever you go, keep an eye peeled for the fat and sassy black bears and feral hogs that both prosper in these rugged, fertile highlands.

Set the head-spinning gash of the Grand Canyon in its full context by rambling around the Kaibab N.F. bracketing both the north and south sides of Grand Canyon National Park (which welcomed more than 6.3 million people last year). From pinyon-juniper scrub to ponderosa parklands to subalpine spruce-fir timber, the Kaibab, split among three districts, encompasses some awesome Colorado Plateau ecology—and downright limitless recreational possibilities for experiencing it firsthand.

In the Kanab Creek Wilderness, trek into the redrock depths of the Kanab Creek Canyon gouging the Kaibab and Kanab plateaus as it drains to the Grand Canyon. On the Kaibab Plateau north of the Canyon, scout for the resident (and controversial) bison herd and dark, high-soaring California condors. Beyond the South Rim, journey across the Coconino Plateau to the Kaibab’s southernmost sector, where you can survey 10,418-foot Kendrick Peak’s dizzying summit panorama. Or mountain bike one of the most scenic rides in the country along the Rainbow Rim Trail, the only place to mountain bike along the Grand Canyon.

More than 4.5 million people visited Rocky Mountain National Park in 2018, and it’s no surprise why—with more than 70 Front Range summits above 12,000 feet, oceanic tundra, glassy tarns, and huge wapiti herds on tap. But don’t overlook the flanking Arapaho and Roosevelt national forests. Four national forest wilderness areas directly border the park, and they’re just as stirring: from the litter of 13,000-plus-foot horns in the Indian Peaks Wilderness (which includes part of Colorado’s biggest glacier, the Arapaho) to the granite benches in the pint-sized Neota Wilderness.

You can also drive America’s highest paved road up to 14,264-foot Mount Evans, an iconic Front Range 14er, which harbors some of Colorado’s northernmost groves of tough-as-nails, crazy-long-lived Rocky Mountain bristlecone pines. Meanwhile, Boulder Canyon calls to rock climbers as irresistibly as the Cache la Poudre Wild and Scenic River does to whitewater kayakers and rafters.

Okay, so the Dixie—Utah’s biggest national forest, straddling the physiographic frontier of the Great Basin and Colorado Plateau—doesn’t directly abut Zion National Park (4.32 million visitors in 2018), but it’s mighty close by, and it claims scenery to stand proudly alongside the national park’s sublime canyonlands. Tramp the Summit Trail through the wilderness-protected high country of the Pine Valley Mountains, with their shadowy spruce woods, sculptured bristlecone pines, and fine prospects of Zion’s colorful geology. Or bushwhack the wild canyons of the Cottonwood Forest Wilderness, where ephemeral streamers and hanging gardens pattern sandstone walls. Solitude ain’t hard to come by in the Dixie.

With its epic geyser basins and plentiful wildlife, the world's oldest national park—which hosted some 4.1 million in 2018—is, it goes without saying, a must-see. So, too, though, is the vast and wild Forest Service acreage nestling Yellowstone: critical public lands in the Greater Yellowstone Ecosystem framework.

For one thing, it’s in these national forests of its hinterland where Yellowstone’s mountainscapes crescendo to all-out alpine grandeur—from the matterhorn tooth of Pilot Peak in the Absarokas to the high, weather-beaten rockland of the Beartooth Plateau. You’ve got primo day hikes and world-class backcountry that feels just as primal as Yellowstone’s roadless (and grizzlied) depths, not least in the Teton Wilderness, which encompasses the corner of one of the Lower 48’s largest roadless areas. And awesome Greater Yellowstone water awaits: on the Madison River through Bear Trap Canyon and on the Yellowstone through Yankee Jim Canyon in the Gallatin N.F., and on the North Fork Shoshone in the Absarokas of the Shoshone N.F., to name a few standouts.

In 2018, more than 4 million people clapped eyes on the near-mythic landscapes of Yosemite National Park, epitomized by the granite-walled glen of Yosemite Valley. If this world-famous park’s throngs (and car-burglarizing black bears) have you down, consider embellishing your Yosemite visit with some High Sierra adventuring in the adjacent national forests.

The scenery’s certainly Yosemite-caliber, whether you’re talking Thousand Island Lake beneath Banner Peak in the Ritter Range or the prospect of the otherworldly Mono Basin from the scoured heights of the Dana Plateau. And you can wander a colony of godly giant sequoias, the Nelder Grove, that’s typically much quieter than Yosemite’s three sequoia stands.

More than 3.4 million people basked in the glory of Grand Teton National Park in 2018, meditating on those iconic snarled Teton fangs, boating on the Snake River or the big foothill lakes, oohing-and-aahing over moose and black bears and white pelicans and coyotes. Two of the same national forests that buttress Yellowstone rub shoulders with Grand Teton as well: the slender Caribou-Targhee (mostly in Idaho) and the 3.4-million-acre Bridger-Teton (in Wyoming), one of the biggest national forests in the country.

The Caribou-Targhee’s Jedediah Smith Wilderness offers sublime backcountry approaches to the Teton high country. Hike up Teton Canyon to the rock garden of Alaska Basin, for example, which is also reachable by the outstanding Teton Crest Trail. And the portion of Bridger-Teton N.F. nearest Grand Teton National Park includes the sweeping limestone heights of the Gros Ventre Range, a critical corridor between the Greater Yellowstone and the Wind River Range and the summer pasture for many of the wapiti that winter in great number in the National Elk Refuge. The Gros Ventre Slide National Geological Area presents the scene of a massive 1925 landslide that dammed the Gros Ventre to form Lower Slide Lake.

Olympic National Park, experienced by some 3.1 million in 2018, is famously diverse: from a raw, stormy seacoast and some of the world’s standout temperate rainforests to high-country glaciers and drier rainshadow conifer woods. Olympic N.F.—home to five wilderness areas—partly buffers the park on all its aspects, offering something of a similar variety pack.

Near national forestland on the south shore of Lake Quinault grows some of the world’s mightiest trees, including among the very biggest Douglas-firs and Sitka spruces anywhere. On the other side of the Olympic Peninsula, Seal Rock offers a rare Forest Service developed campground on saltwater: a serene Puget Sound counterpart to the camping available across the mountains along Olympic National Park’s outer coast. And if you’re a hardcore mountain lover, the Olympic National Forest wildernesses on the park’s eastern boundary include some of the signal peaks of the Olympics: the Brothers in the Brother Wilderness, for example, and Mounts Skokomish, Cruiser, and Pershing in the Mount Skokomish Wilderness.

With its layer cake Canadian Rockies-style peaks, Glacier National Park (2.96 million visitors in 2018) marks one of America’s great mountainscapes, and it anchors a globally significant wildland complex: the Crown of the Continent Ecosystem. Some awesome Crown of the Continent vistas—and some raw Rocky Mountain backcountry—await you just outside the park, too.

The Flathead N.F. contributes most of the national-forest acreage fringing Glacier, although the Lewis and Clark N.F. borders its southeastern segment along the Rocky Mountain Front. One of the treasures of the Flathead is the 287,00-acre Great Bear Wilderness, headwaters of the Middle Fork Flathead River and major component of the massive Bob Marshall Wilderness Complex—one of the biggest roadless chunks in the Lower 48. The wilderness is aptly named, too: You’ll be sharing the river bottoms, avalanche chutes, and high meadows with lots of grizzlies, which find one of their standout refuges in the Crown of the Continent backlands. Then there’s the Jewel Basin Hiking Area in the Swan Mountains, open only to foot travelers and glinting with more than two dozen high-country lakes.

With its yucca savannas and bouldery inselbergs, Joshua Tree National Park, sprawled along the messy seam between the Mojave and Colorado deserts, presents as ethereal a landscape as you’ll find in North America. In terms of bordering federal acreage, the most extensive is managed by the Bureau of Land Management—including the vast, newly minted Mojave Trails National Monument that links Joshua Tree with Mojave National Preserve to the north. (No question: The epic BLM holdings within shouting distance of national parks deserve their own treatment.)

But you don’t have to travel far from Joshua Tree (more than 2.9 million visitors in 2018) to hit national forest: specifically the San Bernardino N.F. to the west, spread across the easternmost Transverse Ranges of the San Bernardino, San Jacinto, and Santa Rosa mountains. These are major uplifts. The San Bernardinos swell to Southern California’s loftiest peak, 11,503-foot San Gorgonio Mountain (aka Old Greyback). For tracing the gradient between desert lowlands and Tranverse Range crests, you can’t do better than the Sand to Snow National Monument, established (along with Mojave Trails) in February 2016 and jointly managed by the BLM and the San Bernardino N.F.; it includes Old Greyback in the San Gorgonio Wilderness.

Next time you visit one of America's national parks, consider making a side trip to one of its equally spectacular (yet far less-crowded) public lands cousins. You'll be glad you did. And as always, be sure to share your adventures with us by tagging #RootsRated.