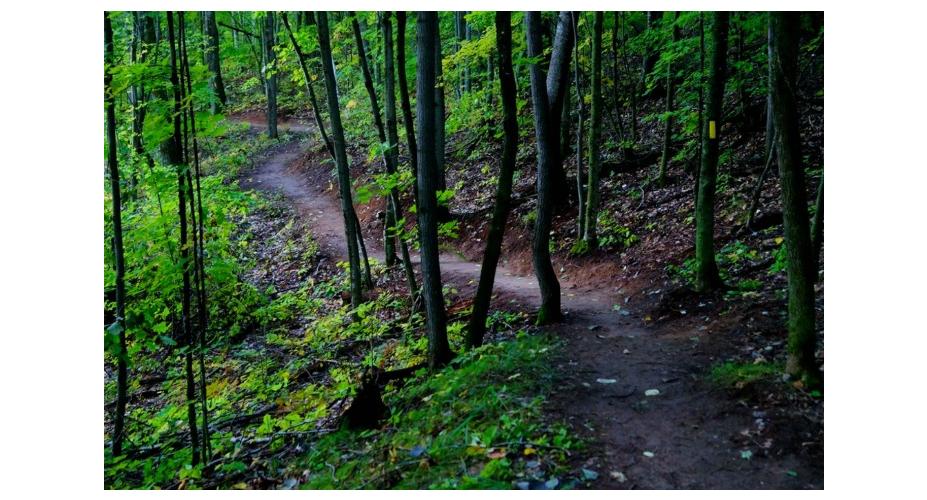 The sun is barely up and the park-and-ride lot is largely empty as I grab my hand-held water bottle and step out of my car, yawning. I’ve had my two cups of coffee, but as usual what I really need to wake me is an hour or so of pounding either pavement or dirt.

This morning I set out on my favorite route: a nine-mile, out-and-back, section of the Ice Age National Scenic Trail near where I live, west of Madison, WI. If I’m not alert by the time I’m a half mile in, the exposed roots in the pine grove or the rocky switchback just beyond will take me down hard and fast.

It needs to be light out to safely navigate the Ice Age Trail, in other words. Before we set our clocks ahead an hour in mid-March for Daylight Savings Time, my morning runs this year were relegated to city streets with lampposts. I don’t mind pre-dawn runs, so long as the roads and paved paths are as free of ice and easily startled critters as they are empty of other human beings. I just want the way to myself, with a glorious sunrise to boot.

That’s the real allure of early morning running: You don’t have to share the world with anyone. Not yet, anyway. Soon enough the din of traffic and road construction will win out. But before the daily grind starts, well, grinding away, the time is all yours. Head out for a run early enough and it’ll just be you, the crickets chirping in your neighbors’ unmowed grass, spring peepers in the catch basins and robins and chickadees calling to one another.

I struggle, as much as anyone, to get out of bed to run. But when I succeed in doing so, I have the same haughty thought every time: “Look at me, starting my day right. No one else is as physically disciplined and dedicated to their health as me. I will be up for anything that’s thrown at me for the rest of the day, assuming I don’t turn back early because it’s so dark and cold.”

Of course that self-congratulatory state dissipates at the sight of the first of many bike commuters—white headlights glaring, rear red lights blinking—emerging from the morning mist. In and around Madison, which was recently designated a platinum-level “bike friendly community,” cyclists are everywhere and at all times, keeping morning runners like me humble.

But as close as I live to the state capitol and its large contingent of serious riders and runners, the Ice Age Trail is a footpath left largely to leisurely hikers and birdwatchers. So before 8 a.m., until I reach the ridge overlooking a popular dog park, I rarely see another soul on the trail.

In the meantime, I scare up a few squirrels and bunnies. The fluffy tuft of a retreating white-tailed deer catches my eye, too. On other morning runs here I’ve been as startled as the pheasants and turkey that exploded in a feathery frenzy from the understory upon my approach.

Those are moments you remember. They distract from the heavy feeling in your limbs, which are sometimes slow to loosen up and relax into a rhythm. I read somewhere once that you should not pass judgment on the quality of a run within the first two miles. I remind myself of that on early morning trail runs such as these.

Whether I finish satisfied with the distance covered or the pace achieved, I can be reasonably assured that the favor I’ve done my body will be repaid later in the day.

After all, it’s mostly true what they say about endorphins—neurochemicals produced in the pituitary gland as a result of exercise. You may or may not experience a full-on “runner’s high,” but you can expect the endorphins reaching receptors in your brain to diminish the perception of pain and trigger positive feelings in the body.

That’s why doctors prescribe physical activity to patients with anxiety and depression. A regular regime of exercise as a treatment can relieve stress and do wonders for your general outlook.

So if running early in the morning isn’t enough to make you feel superior, do it because the biochemical reaction it causes within will make you a better person, in body and mind.

If I see you out on the roads and trails before daybreak, I'll give you a knowing nod and grudgingly let you enjoy my sunrise.