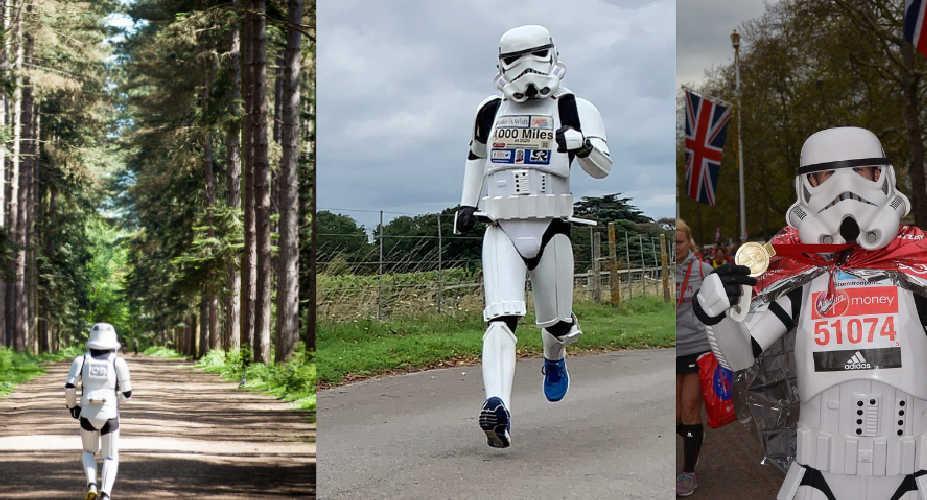 Jez Allinson, aka The Running Stormtrooper is quite the force for good. We asked Jez to share a little more about what inspired The Stormtrooper Project and his passion for charity running.

What inspired the running stormtrooper project?

I’ve always had a passion for charity fundraising, from my first 10km to Half Marathon and then the much revered London Marathon. I ran London for the first time (again for charity) in 2015 in normal clothes and fell in love with the event. I knew I wanted to do it again but could only get in via a charity place.

Why would anyone sponsor me though when I’d done one before? I know! I’m a huge Star Wars nerd/geek. I love the Stormtrooper costume and would love to get one. Why don’t I smash these two passions of mine together?

The rest is history.

How many races have you completed wearing the stormtrooper suit?

What's next for you?

No idea! I’m undergoing some light physio as running 1,000 miles in 2020, coupled with my job as a military helicopter crew chief/crewmen has taken its toll on me. I’m currently enjoying running as me for a change. It’s lovely to be able to just lace up and go rather than taking 30 minutes to get ready.

Thanks Jez! We are inspired by your story, and your dedication to making a difference by supporting to Make-A-Wish and Spread-A-Smile. Follow along with The Running Stormtrooper on Instagram and on his podcast.