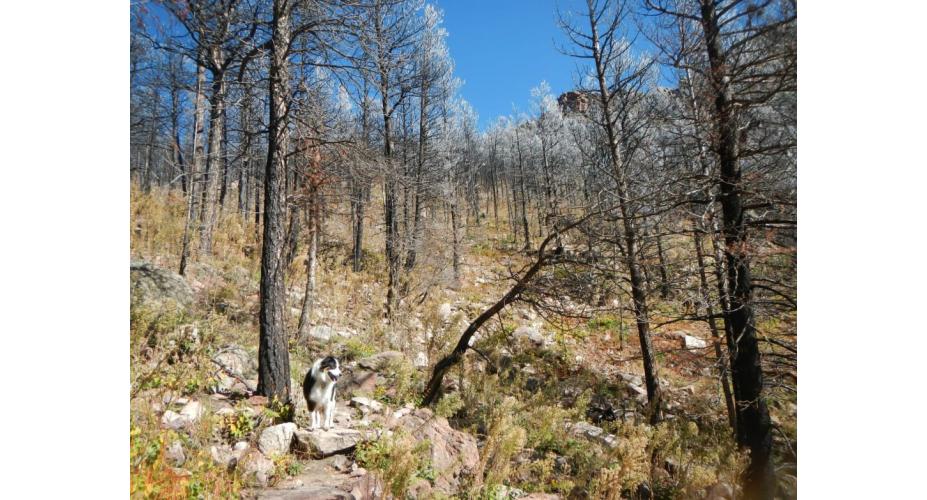 At the mere mention of the word "technical," you can almost see the ears of a Boulder-area trail runner perk. Indeed, the town isn't called “Boulder” for nothing, and runners with a penchant for rough, rugged, rocky terrain will find plenty to choose from trail-wise. The foothills offer a challenging melange of steep ascents, stone staircases, roots, rocks, and even the occasional scramble along the way.

Whether you're new to the trail running scene or a hardcore veteran, these five technical Boulder trail runs should be on your regular rotation. Lace up your favorite trail shoes, bring your fanciest footwork (and maybe a few bandages), and get ready to push yourself to new heights.

Shadow Canyon showing its gnarly side on a winter run. James Dziezynski

This 6.8-mile roundtrip run plays between light and darkness and crushes over 2,000 vertical feet en route to the top of 8,549-ft. South Boulder Peak, the highest point in the Boulder City Parks. Beginning from the South Mesa Trailhead, take the South Boulder Creek West trail through open, airy meadows as you ascend toward the Mesa Trail. A spacious pine forest serves as a prelude to Shadow Canyon proper; several old cabins quietly decomposing along the way add to the scenery.

The canopy of pine trees thickens at the start of the Shadow Canyon trail. This is where the work begins: 1,800 vertical feet of stiff, on-trail running ascends 1.3 miles to the summit, with plenty of boulders, roots, and big step-ups to navigate. You'll get a slight reprieve at "The Beach": a flat, sandy area before the final push. A bit of light scrambling is needed to top out on South Boulder’s blocky summit, where you can catch your breath before heading back down.

At six miles out and back, this classic trail run got a facelift from the 2013 floods that reshaped Boulder’s landscape, giving it a new aesthetic from its previous incarnation. From the Gregory Canyon Trailhead, the Gregory Canyon Trail begins a gradual mile-long climb over fun, solid rock outcrops and well-worn switchbacks. The last part of the first section is dramatically rutted out with 10-foot deep gashes and boulders strewn about, courtesy of the floods. After reaching an old stone meeting house, the trail maintains a constant but comfortable grade with a few waterbars along the way. The final portion of the trail has some big step-ups, with the summit block requiring an easy scramble. Green Mountain’s summit is famous for hosting large gatherings of ladybugs on its boulders—though it’s not uncommon to see a black bear along the way, either.

Your quads will be talking about this one for a while. Walker’s 7.6-mile loop can be run in either direction, and both are enjoyable in different ways. On tap is about 1,500 feet of elevation gain, but it’s how you get your vert that makes this such an interesting run. The clockwise (left from the parking lot) starts with a brief climb to the highest ground on the trail then descends via a series of switchbacks into a shady forest. Turn right at the signed intersection and continue down over a footbridge to South Boulder Creek. Here’s where things get interesting. After passing a series of boulders by the river’s edge, a steep staircase leads up to the second half of the trail—and it’s a burner! It’s 250 vertical feet but feels like a lot more.

Once above the river, the trail grinds up to a secondary parking area before dropping down to the creek. Wrap up your run with an exposed one-mile climb up 890 vertical feet. Doing the route counter-clockwise is a good idea on hot days, since your finishing climb out will mostly be in the shade (though descending the stairs in the middle is tougher than ascending them).

Hall Ranch in Lyons is a 25-minute drive from North Boulder, but well worth a visit, especially for trail runners. A typical 9.6-mile run takes the Bitterbrush Trail 3.7 miles to the 2.2-mile Nelson Loop and back. The centerpiece of the technical running here is the infamous “Rock Garden” portion of the Bitterbrush Trail. The tricky rock outcrops are notorious for drawing blood from mountain bikers and runners alike.

At a high point in the trail, a bench offers great views and the terrain eases up. The Nelson Loop is mostly smooth singletrack and bypasses an old homestead with fantastic views of Longs Peak—watch out for speedy mountain bikers (who usually tend to be on the lookout for runners). If you prefer to avoid the two-wheeled menaces, on your return take the foot-traffic-only Nighthawk Trail 4.7 miles from the western end of the Nelson Loop back to the parking area.

Looking down at the Fern Canyon Trail from the top of Bear Peak. James Dziezynski

This six-mile out-and-back starts at the free parking at National Center for Atmospheric Research. Follow the NCAR Trail down and west to the Mesa Trail, where the Fern Canyon Trail splits off discreetly to the right a few hundred feet after the intersection with the Bear Peak West Ridge/Bear Canyon Trail. Fern Canyon is 1.4 miles long but ascends 2,600 feet in that time. The trail is punctuated with big steps, gnarly roots, boulders, and switchbacks. The final scramble along Bear Peak’s iron-rich rock is above treeline and has a bit of exposure—the 360-degree views from the top are the clearest in Boulder.

To make a longer day of it, descending via the Bear Peak West Ridge Trail 1.9 miles to the two-mile Bear Canyon Trail takes you through the spooky zombie trees of a burn zone before reaching green, grassy meadows. Bear Canyon will reconnect with the Mesa Trail at the aforementioned intersection and leads back to NCAR.

Written by James Dziezynski for RootsRated.