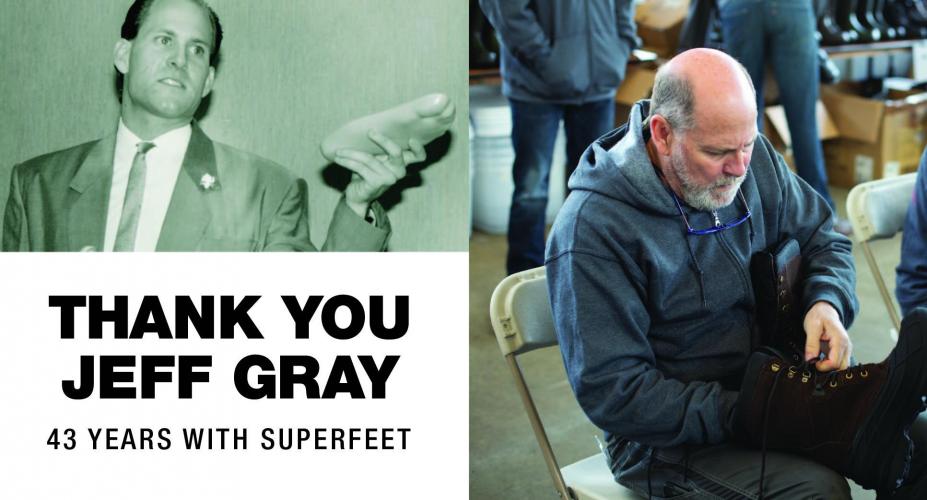 Who do you most admire? Maybe it is a mentor, a teacher, a counselor or friend. Someone you can lean on for advice and knowledge. Someone who believes in you and has the ability to see the potential in every situation.

At Superfeet, Jeff Gray is all of the above.

A lucky few people know Jeff for the time he spent with them individually assessing their foot issues and modifying a shoe, ski boot, skate or insole to help them move pain-free.  A larger group of footwear and sports industry professionals know Jeff by the passion he brings to education and the science of great fit.

Even if you have never heard of Jeff, if you've ever had your running shoes or ski boots fit for insoles then he has had an impact on the way your footwear fits and feels.

This year Jeff will hang up his Superfeet Brannock device and insole trimming scissors, retiring from his 43-year career at Superfeet. Today, we celebrate and honor Jeff's incredible achievements as a founder of Superfeet and heart of our brand.  Jeff has had an incredible impact on the lives of millions of people during his almost life-long career with Superfeet.

As a kid growing up in San Rafael, California, Jeff was a bus ride away from some of the nation’s most well-known ski resorts. Perhaps even luckier than his location was his parent’s passion for the sport. Suzanne and Ernest Gray operated one of the areas’ largest ski clubs bussing kids to and from the Alpine Meadows, Lake Tahoe mountains on weekends. At a young age Jeff joined the Alpine Meadows and later the Squaw Valley race team and an obsession with skiing was born. By high school he had season passes at both Alpine Meadows and Squaw Valley. The day after his graduation he moved all of his belonging to Truckee, California and was dreaming about his next powder day.

Jeff was certain of one thing: he wanted to work in the ski industry.

Jeff’s passion led him to working for ski shops fitting boots. He helped start a custom ski boot fitting shop called Footloose in Mammoth Lakes— a small ski and boot shop with a big vision. The owners of Footloose were working closely with a startup company that would soon be called Superfeet who believed ski boots didn’t have to hurt.

“We wanted to show the ski industry that they could offer the same ski boot fitting that was done at the World Cup and Olympic levels.” – Jeff Gray

Jeff realized that by upgrading the fit of people’s ski boots, he could change someone’s experience on the hill. A more comfortable boot meant that everyone from beginners to experts would be more likely to enjoy their day skiing. Jeff was doing exactly what he wanted, sharing his passion for skiing with others, pain free.

Jeff worked relentlessly alongside original Superfeet founders Dennis, Chris and Sven to develop and test the shape of Superfeet products. Dennis would come up with insole concepts and send them to Jeff and the team at Footloose to create and test. In the months that followed Jeff became a crucial team member, helping to develop the signature Superfeet shape, fit philosophy and overall brand.

“It was really a team effort you know; I would do anything from product development to product testing to education and even shipping products out. I did whatever needed to be done to ensure the success of the company.” – Jeff Gray

Jeff soon traveled to host clinics for retailers across the country. In these early, profit-scarce days, only his expenses were covered sometimes, not his work teaching clinics. He basically worked two jobs at the same time—Superfeet and Footloose, with the Footloose work paying the bills. Because of his faith in Superfeet, he believed that his sacrifice would one day lead to a bigger opportunity. At the time he did not know that he was pioneering an education program that would become a highly respected cornerstone of Superfeet’s success and beginning a lifelong career of helping people live more comfortable, pain free lives.

Jeff worked with Dennis, Chris and Sven as they developed the first Trim-to-Fit Superfeet insole, which became Superfeet GREEN, the company’s biggest seller still today. In 1995, he wrote our first order in the outdoor category with REI.

When Superfeet shifted its primary focus from custom to Trim-to-Fit, no one knew better than Jeff how much work it was to educate people about biomechanics and the benefits of the products. The good news was that years of experience in education and training prepared them well. In the years that followed Jeff dedicated his time and energy to educating retailers and customers about the benefits of Superfeet insoles.  He would hit the road mid-August to visit accounts and tradeshows and not get home until Thanksgiving.

As Superfeet introduced new products, opened new accounts, brought on new leadership, and began to grow, Jeff was a constant through it all. He was with Superfeet in 1977 to develop and launch the first product, and in 2015 when the company made the decision to go 100% employee-owned.  Jeff was part of a small group of owners who graciously sold their shares to Superfeet employees.

Jeff’s positive influence does not stop at the foot.  In 2016 he helped evolve Superfeet’s 1% giving program to make an outsized impact for people around the world. He changed the lives of Superfeet employee-owners and villages of people in Guatemala through the programs he established with Medical Teams International. He supported veterans with the relationships he built in support of the Fisher House Foundation.  Jeff secured the comfort of thousands of homeless people across the USA by connecting them with footwear, insoles and toiletry kits with his annual  Our Hearts to Your Souls work. Those accomplishments are just the tip of the iceberg.

After retirement Jeff plans to continue his volunteer work with a local wound care clinic treating patients with foot injuries. He will continue volunteering with Hearts to Soles making sure homeless people across the nation have adequate footwear and insoles. When he’s not thinking about feet, he will be restoring the cars in his collection. Among them a 1987 Jaguar XJS V12 given to him by Dennis, Superfeet’s founder.

We will miss Jeff’s humor, his heart, generosity, passion and expertise everyday. As Jeff powers down his computer, ditches the expense reports and rolls back the time he spends in meetings, he’s left us with one question.

How do you thank someone who has had such a profound impact on your brand and the lives of those who come in contact with it?

Our answer: you can’t. There are no words to express the depth of our gratitude.  Regardless, we will say them anyways.  Jeff, thank you for all you are and all you have done for Superfeet.

We would not be the brand we are today without you.