What It's Really Like to Complete the World's Toughest Endurance Race 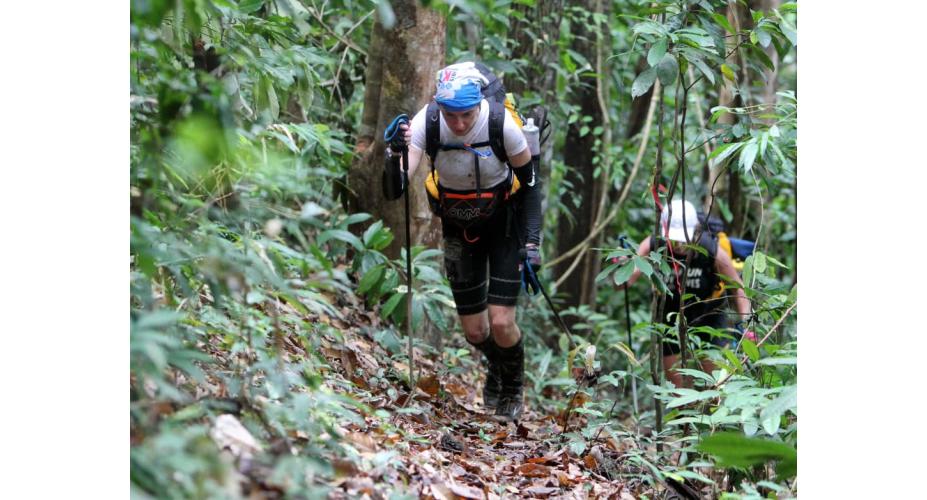 It’s nearly dark when Kathleen Hamrick jogs into the jungle camp. She’s exhausted, overheated, soaked to the bone with river water, sweat, and grime. She has been running through the Amazon for five days now—through swamps that swallow you up to the waist in mud, along poorly marked village trails, up and down punishing hills, and across deep water river crossings.

There will be no sleep tonight. This stage of the course involves racing through the darkness, and there are two days still to go before the finish line. But Hamrick lays down her pack and immediately begins the nightly ritual: shoes off, dry your feet, get in your hammock, and rest while you still can.

A few minutes later another runner stumbles in, and Hamrick’s brother, William, part of the medical team, walks over to him. “Hey man, what’s going on?” he says. “You need me to take a look at your feet?” The guy nods his head and peels off his shoes, and William steps back.

“The whole bottom of his foot was coming off,” says Hamrick. “Jungle rot.”

This is the near-legendary Jungle Marathon, dubbed “The World’s Toughest Endurance Race” by CNN. The race covers 157 self-supported miles in six stages over seven days through the deep Tapajos National Rainforest in Brazil, where runners face extreme heat, unforgiving terrain, and dangerous wildlife. Except for water, runners have to carry everything they will need for the whole week—packs usually weigh in at just over 30 pounds, lugging the extensive list of compulsory items, which includes all their food, iodine, and hypodermic needles for blisters.

This past October 2016, 55 runners from 14 different countries tested their physical toughness and mental tenacity against the brutal course. Hamrick was among them.

All smiles despite the grueling nature of the course. Fabio Andrade

A native Alabamian, Hamrick wasn’t much of a runner growing up. That all changed when, after some serious health complications in 2006, her doctors told her she might never be able to run. Most people would take their word for it. Hamrick decided to prove them wrong, and ran her first marathon.

Running became for Hamrick an active protest against her limitations, a way to see progress, get outside, and experience the world on foot, away from the noise and demands of day-to-day life.

“I developed a love for my feet against the ground in these beautiful places,” explains Hamrick.

Expedition races are just one more way she pushes herself and the boundaries of what is possible.

In 2013, Hamrick and her sister Liz ran the 170-mile Grand to Grand ultramarathon, racing from the rim of the Grand Canyon to the summit of the Grand Staircase over seven brutally hot days. Despite suffering a stress fracture mid-way through the race, Hamrick won her division.

She carried that mental toughness and love of a challenge with her into the Jungle Marathon. For Hamrick, this was more than a race, it was about facing her fears and becoming something more.

Going into it, still water was one of Hamrick's biggest fears. Fabio Andrade

“I’ve always been terrified of deep, dark water,” Hamrick says. “So that’s one of the things that attracted me to the race. I knew I would have to face that and overcome it.”

Over the course of the race there were miles and miles of swamps and river crossings, but the worst, for Hamrick, came on day four when the course ran straight down a river for several miles.

At first, the river was clear and cool, a welcome refreshment from the blistering heat, but before too long it turned murky, the water got deeper and faster, and Hamrick started hitting trees that had fallen under the surface, ripping the skin from the front of her legs with the impact. When she tried to get a footing, the muddy river bottom pulled her down up to her neck, leaving her floundering to keep her trashbag-packed gear dry and colliding her now-raw skin again and again into the hidden logs.

“I found myself hyperventilating out of fear,” says Hamrick. “I couldn’t see what was in the water with me, didn’t know what I was grabbing onto trying to get my balance. I was terrified. I just had to calm myself down, take deep breaths, and continue down the river more slowly.”

“I was scary, but it worked,” Hamrick adds. “I’m not afraid of deep, dark water anymore.”

Training to be Queen of the Jungle

Making friends with the locals along the course. Fabio Andrade

To prepare for the race, Hamrick began training around a year before, starting from a base of only around seven miles a week and running primarily for time on her feet rather than miles.

“I mostly trained on trails in Birmingham,” says Hamrick. “I like Red Mountain Park because it’s close by and all in all a really fabulous place to run. Then I did elevation training at Ruffner and Oak Mountain State Park… They’ve got some good climbs and descents.”

In the final few months, she was running about two hours a day, every day through the week, then running for eight hours every Saturday and Sunday. To mimic the conditions she would face in the jungle, one long-run day per week Hamrick would carry a 31-pound pack and step into a hot shower, shoes and pack and all, to start off her run completely soaked.

“My main concerns for the race were heat and humidity, which we have here in Birmingham,” Hamrick adds. “Anybody around here in the Southern states would actually probably do quite well in the jungle, because it’s just a perfect environment to train for that race.”

Wet feet are just part of life during the Jungle Ultra. It's caring for them that's the tough part. Fabio Andrade

One thing you can’t train for is the wildlife. According to the race website, jungle creatures abound. Runners step over snakes on the trail and sometimes spot piranha, anaconda, and river dolphins in the numerous water crossings throughout the race. There’s at least one story from a runner several years back about being stalked by jaguars while racing through the night. None of this phased Hamrick. According to her, one of the biggest dangers was simply not taking good care of your feet. Remember that guy with jungle rot?

Thanks to her disciplined nightly ritual, Hamrick’s feet fared better than most. But other, less careful runners started to get blisters by the third day, and with nearly a hundred miles to go through parasite-filled jungle swamps, many of those blisters became badly infected and caused huge problems.

“Foot care was key, and a lot of people were just not caring for their feet. They were keeping their wet shoes on and not drying them out,” says Hamrick. “Some of the fastest runners dropped because of foot complications.”

Heat was another huge challenge. With 99% humidity and temperatures climbing over 100 degrees, the jungle was intensely hot and wet, so much so that Hamrick and the other runners were given two days to acclimatize before the race began. With the heat, water became a major issue. Because the race ran through remote, protected areas of the rainforest, the race organizers had arranged for local villagers to put out water at designated drop points for runners to rehydrate. That didn’t always pan out.

Sometimes, the villagers would forget to put out water, or they would put it somewhere different than the prearranged spot. As a result, runners would go for hours through the blazing, sticky hot jungle, carefully rationing their water, only to arrive at a designated water point and find that nothing was there. Hamrick ran out of water three times this way. Several times she added significant mileage to her total when, finding no water, she thought she was lost and retraced her steps.

“It’s really terrifying to run out of water in the middle of the jungle,” Hamrick says. “It just plays tricks on your brain, you know?”

Though Hamrick had some close calls, other runners fared much worse from the heat and dehydration. Several threw up blood. One athlete collapsed alone in the jungle, and the medical crews had to go find him. All told, the race had a 30% dropout rate, better than most years.

On the final day of the race, a 15-mile stretch of soft sand beach, Hamrick, once again, could not find water at the designated drop.

“I sprinted that section,” laughs Hamrick. “I was the first female across the finish line that day only because I was terrified that I would die of thirst.”

The “Why” of an Expedition Racer

What is often most fascinating about adventure athletes, particularly outdoor-oriented endurance athletes, is the reasons why they do what they do. Though innately competitive, it’s often when you press ultrarunners, mountain climbers, and expedition racers that you learn the unexpected philosophical or existential motives. The reason they run, climb, bike, suffer, usually extends beyond the sport or the event.

“One of the big reasons why I do these expedition races now is that, at the starting line, I don’t know 100% if I can finish it,” says Hamrick. “It’s scary to jump into something that you might fail, but I think that stepping into that place where you are uncomfortable is how you learn and grow. That’s why I do these races, to push myself outside of my comfort zone.”

Hamrick sees similarities between expedition racing, entrepreneurship, and life—the assessment, risk management, problem solving, and then ultimately, constantly and intentionally pushing the envelope and taking calculated risks, in order to grow, whether as an athlete, a business, or a person.

“That’s something I try to instill in my students,” says Hamrick. “If you’re not a little uncomfortable, you probably are not doing whatever it is you do to the fullest extent.”

So, what’s next for Hamrick? She’s currently got her eye on a 155-mile, self-supported expedition race in Hawaii, running from one volcano to the world’s most active volcano (of course). She’ll be training for it over the next year, and raising support for a number of charities along the way.